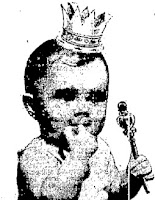 There is this guy -- The Imaginary Stud -- I'm focusing on for a while. Because he's so extraordinary. He feels, at least he says, that he's responsible every time a pregnant woman walks by or a woman with a baby. "Hide me!" is his constant plea.

Maybe he is responsible for a few of them. Like I said, maybe he's gotten lucky a few times after a wild drunk. But could he be the father of every baby out there? Somehow, I seriously doubt it!

But whether he is indeed the True Stud he thinks he is, and not just the Imaginary Stud I think he is, that question will have to wait for the DNA results, if we're ever able to get him to take a test. Because he appears to be forever on the run, pausing just long enough, according to the story, to impregnate some poor gal who hasn't heard of him. Assuming he's ever impregnated any actual women...

He fancies himself a regular Johnny Peopleseed. Like Appleseed of lore, Peopleseed also has his mission in life, armed only with a single front appendage and a sack of seed. To hear him tell it, the sack continually replenishes itself like the oil and fishes, the cruse of oil and the 5,000 fish of the Bible. He cruises into town, the tank topped off, an eye out to disperse what is needed, knowing it will be replaced later. Like perpetual motion!

I'm only imagining what must happen on one of these encounters: "Hello." A possible likelihood is at hand, a doll face who doesn't know she's meeting the sire of thousands. He's quite open with her now, until he gets his way, then we'll hear him hiss, "Hide me!"

She's standing there with blue jeans cut midriff-high, with enough buns to start a bakery. His eye scans her like the Six Million Dollar Man. Her beauty is one thing. But the Imaginary Stud makes complex evolutionary calculations. "Her nose plus mine. Her pleasant eyes plus mine. Her fantastic build plus mine. She's got the hips for quintuplets!"

He's done it many times, the story goes. And if that's true, the calculations he makes must become less and less conscious and more instinctual. Like the hidden knowledge of a spore or seed, doing its thing, knowing not how. Spore trailing spore, seed/egg, peach/pit, vital essence, the rupture of the egg, he senses all of it at the primal level, raising his head in a sign of joy at the recognition, hearing distant thunder as the lightning delivers another soon-to-be-born soul. Who can blame him? He didn't ask for this duty of nature, we're assuming.

I was reading a few pages of James Joyce's Finnegans Wake, and came across a passage that reminded me of the Imaginary Stud:


"And, to make a long stoney badder and a whorly show a parfect sight, his Thing went the wholyway retup Suffrogate Strate." (p. 242.)

I couldn't have said it better myself. But I can try:


Needles to say, he epistemologized her, in the bibbling sinse, with an episiotomy probelly in her suture, big heads tending to run in his lying.

Posted by dbkundalini at 3:37 PM