The Imaginary Stud -- Something So Precious 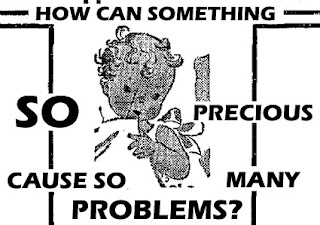 You remember the Imaginary Stud. He's just a guy, respectable in every way, simply out obeying life's prime directive to reproduce as far and wide as he can. There shouldn't be any problem with that.

There shouldn't be a problem, but of course it's right when you think you're home free that your real troubles begin. Others, in jealousy or obeying some social injunction, step in to hassle you. It's not like he was doing anything he shouldn't! Spores, seeds, the whole thing, are nature's way. No one chops down a tree for dropping its seed.

And it's not the fruit of his actions that's disagreeable, the baby. That's where we all came from. The rest of us, for the most part, are out there doing our part to perpetuate the species, so there really should be no objection. "Children are precious," the Imaginary Stud insists.

Maybe you can tell I'm coming around to a greater belief in the Imaginary Stud's claims that he's the father of every child he sees. Although I'd have to tweak that, I know he's not the father of every child, but perhaps he really is the father of quite a few of them. (I'm still going to refer to him as "the Imaginary Stud" just to keep it clear who I'm talking about.) It would definitely explain the very real tension he shows when he sees a pregnant woman or a woman pushing a stroller. "Hide me!" he hisses.

Be that as it may, I definitely agree with him that children are precious. To have a baby on board, what greater fulfillment could there be for any woman? And to have a houseful of them, such love you're not going to get anywhere else. They are precious, and yet there's always someone to get in the way and deny it.

I saw the Imaginary Stud all banged up the other day and asked him WTF? He looked at me and recalled one of the worst nights of his life. He'd arranged a rendezvous with a particular woman, then found out too late it was a set-up. He'd cried out, "It's a trap!" The woman had him cornered, screaming, "You knocked up my sister and abandoned her, you bastard!" That was her big beef. And if that wasn't enough, she'd arranged a few bulls to be hiding outside in the brush.

He described his thoughts: "It's bad enough I have to deal with a troupe of evil mamas, now their crazy deranged sisters, too?!" He tried to pacify her, a clearly deranged woman, but it was no go. She opened the door and in rushed the bulls. A couple of them held him while the other pummeled him, even knocking out his two front teeth (uppers).

The sister was cackling like a maniac, "Kick him where it counts!" Meaning he would be the sad recipent of a swift, painful assault to the crotch. They took him out and left him in a heap in the middle of the road. Cars veered to miss him and honked their horns, and it was with the greatest struggle that he managed to crawl to the ditch.

He complained to me, "How can something so precious go so terribly wrong?" The whole thing had been a scam. She had lied to him when they could've shared so much. Again, what was precious was trodden underfoot by deceit. Then, capturing him as they did, the kicks, the broken teeth, it was all so wrong, like a blasphemy in the face of life itself.

"But what can you do?" I asked. "There's always going to someone who doesn't get it, so all you can do is rise above it and go on, knowing that you're doing the right thing even if the whole world doubts you." With that, he calmed down, enough that he was able to go back home, get an ice pack and find a comfy chair, and settle down with a good book.
Posted by dbkundalini at 2:05 PM