Pastor Wadd: The Sexual Root Of Everything 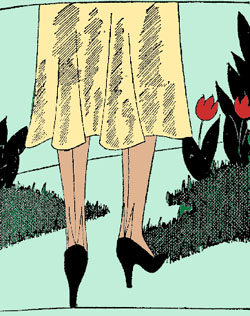 One of the more influential people in my life has to be my preacher, Pastor Wadd. He's right up there in the top 50 overall, for sure, and the top 5 of those having to do with understanding the underlying nature of life.

You probably remember, Pastor Wadd's special area of expertise is sexual addictions. He counsels guys on that topic day after day, plus a few ladies. I've never actually been to one of these sessions, not having that problem. My willpower is impeccable. Plus, several years ago I had the zipper permanently welded shut on all my pants.

Anyway, in addition to his counseling, Pastor conducts regular Sunday services, and that's where I hear his teaching. I just wanted to clear that up so no one gets the wrong idea. I've never even been to Penn State!

Whether you have a problem in that area or not, it's still interesting to hear the man hold forth with his various theories. Whatever he says, he's always definitely convinced, and with a spirit of power like he has, it's hard not to be impressed. This past Sunday his message was on the pervasiveness of sex in our culture and psyches, with religion serving to replace that, if God's grace is allowed entrance, and we're lucky.

Of course, the man's doctrine is that there's a sexual root to everything. If you turn when a woman passes by, there it is. If there's any undue perspiration, prolonged eye contact, or even the slightest variance in your breathing patterns, you're guilty. And I hate when he gets started on what it means when you move your legs -- you want to stay perfectly still around him -- because what he defines as rubbing is very subtle.

Sometimes, though, as much an expert as he is, I can't help but think he's making things up. Or seeing connections -- like with the rubbing -- that simply aren't there. He's like Freud. If you drink milk, you're lusting for your mother. That kind of thing. He sees strange linguistic stuff, unlikely connections, that seems like an obvious stretch.

Like "proclivities." He parses it for us, the root of the word, that "pro" means "for" and "clivity" is what every woman has. It may be normal size or it may hang down like the end of a scarf. It may be dainty and ladylike, like your pinky, or it may be heavy, with the girth of a Marine's duffle bag. So women are the ones with proclivities, making them so darned tempting to men.

The corollary in men is a word I hadn't heard before, "prodermis." "Pro" again meaning "for" and "dermis" meaning "skin." Put it together, he says, and you have "foreskin." Which the children of Israel were supposed to lose that they might be true. OK, I'll give him that one. It sounds convincing.

Be that as it may, Pastor Wadd is definitely serious about being true, even to the point of making his counselees suffer to attain it. A guy from the church, whom I also know from the exercise club, he counseled on being chaste, meaning preserving his "vitality," his "vital essence" in the most extreme way, going months. But he bloated up so much, some of the guys started calling him Lugnuts, and he finally had to go in and have it lanced.

My own take on it: There's a time and place for everything, and let's face it, that includes using the equipment God gave you and not letting it go to waste.
Posted by dbkundalini at 11:42 AM