If I Had October To Do Over 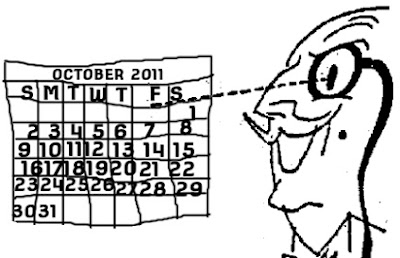 Each of us has a finite number of months to live. And another one has passed.

I've had a wistful day, maybe it's the clouds and drizzle. I've been thinking back to October and wishing I'd done so much more with the time. I always have the best of intentions, but then there's this and that and the other thing that seems to hog up all the time. And before I know it, the month has passed and I haven't really accomplished anything.

On the blog I had 31 posts, and since there was 31 days in the month, that looks like I did one a day. But I didn't, because I wasn't inspired some of the days. Then when I was inspired, I was bang bang bang, with 31 being a pretty good number to end up with. But it's not enough. I'd love to have a month where I could put out, let's say 30,000 posts, a thousand a day! Good ones! Probably never happen ... not if I fritter away my time...

If only ... If only I could go back and do it again, things would be different! I swear I would have done so much more.

I can easily picturing myself in October, if I had it to do again, reading with good concentration for two solid hours a day, scholarly stuff, studies that would guide my thinking and contribute to my personal fulfillment. It didn't happen, that's for sure. But if I could do it over again, that'd be one of my highest priorities. Imagine all the stuff I could've learned in an extra 62 hours of in-depth study!

On the personal organization front: My place here is a mess. I look like someone from "Hoarders," except I'm generally happy. I'm surrounded by candy wrappers, since Halloween was just a couple days ago. I bought well over $20 worth of candy, really expecting a lot of kids. But guess what, I didn't get one single kid, leaving me with two heaping plastic bowls of candy! Certainly if I had October to do over I wouldn't have bought all that candy. And besides that, I would like to have kept myself more perfectly organized, everything in its place, everything neat and tidy. But it didn't happen, and at this point it isn't likely.

It would've been nice to have volunteered some quality time to service organizations and the church. They're constantly calling for volunteers, and I'm always thinking I should get in there and kick some serious accomplishment butt. But then I make excuses, I don't have the time, or they'd just give me busy work and tell me "Good job" to hook me into the system. November doesn't look good for it, December's always busy, then we're into the whole New Year. October would've been perfect, if only I had it back.

I would love to go back to October for something else. To avoid all conflict and recriminations. I had a few petty little arguments with people, just minor crap, nothing really. And it only took minutes. Then I wasted the rest of the day(s) stewing over it, thinking of stuff I could've said, thinking of ways to burn my bridges while also managing to avoid them in the grocery store. I hate rage and what it does to me. And if I could go back, I'd turn the heat down on the boiling pot.

I would change my diet if I could go back. I already mentioned the candy. I've been eating it like crazy. And I'm getting fat. Obese, at least by my standards. I haven't been walking much since it got colder. So the pounds go on and I'm more and more weighed down. October is key to all this, to my success at keeping the inches off, but now that it's gone, I'm losing hope. I should have taken the step to become a vegetarian, or at least a pescatarian. I remember starting October with that thought.

If I could relive October, and this minimum task is one I could have accomplished, I would memorize all the presidents and their dates as well as the continents. I keep seeing these questions on Jeopardy that I should be getting.

One other thing, I would hold my sleeping down to four quality hours a night, then spend the rest of the time striving for perfection and major accomplishments, and living completely without worry, if only I had October back again.
Posted by dbkundalini at 4:32 PM