Dr. Momus Of The Museum Of Art 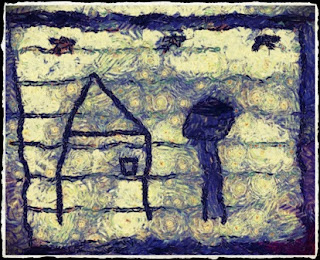 Dr. Momus of the Museum of Art likes to vary his habits. One habit involves going out for breakfast, which he usually does unless there's something else afoot to prevent him, such as an important meeting or another responsibility. Like schmoozing a rich museum patron who's already eaten.

His habit, as I said, is going out for breakfast, but I also said he likes to vary it, which is just a roundabout way of saying he doesn't go to the same place every time. He spreads the wealth. He supports most of the restaurants in town, not in any regular way, but going wherever strikes his fancy on a given day. You can be sure, though, that his fancy is not to go to the same place over and over without varying it. OK?

There's some good to this scheme of doing things. "Variety is the spice of life" is what the old saw says. Who wants to have the same old bagel and coffee at one place if you can have it somewhere else? At least occasionally. I definitely know what he's thinking: It's a drag going to the same old places all the time. But I've been going out for breakfast so much that I've also worn out the new places.

Then, and this is where Dr. Momus' role at the Museum of Art comes into play, who knows what he might find of an artistic nature if he varies his eating habits? Because restaurants sometimes have artwork on their walls for sale. Seriously! If you go to McDonald's all the time, of course you're not going to see it. (Dr. Momus actually does go to McDonald's once in a while, but not that much.)

Anyway, here's what we're getting to. One day I went to a particular cafe for breakfast, a place I'd never been before. I saw some rudimentary artwork on the walls that tickled my funny bone (I'm trying to be merciful here.) I was like, "Look at that one!," while making disparaging remarks about it.

PERSONAL INTERLUDE: Over a year ago I bought a canvas and some paint. I haven't used them at all. Because I don't have any idea how to paint, but I know what I like. My excuse for not painting on this canvas is that it's too small; I need a bigger canvas. My small canvas isn't even out of the plastic yet. The only reason I don't buy a bigger canvas is that I haven't used the small one yet! But not everyone is as reluctant as I to get going on the thing...

The painting I'm pointing to, in my opinion, is no good. It sucks. It's a house and a tree, both very elementary, both very primitive. So imagine my surprise when I'm sitting there right when Dr. Momus (Dr. EFFEN Momus of the EFFEN Museum of EFFEN Art!) comes in, immediately espies this crappy painting, and declares it a work of genius, even going so far as to describe it as a lost Van Gogh! (He says Gogh like he's clearing his throat, so it has to be right. The only other name I know like this is Bach. If you had an expert talking about Van Gogh and Bach in the same breath, you'd need a spittoon!)

I'm like, "You can't be serious, you crazy ninny!"