Arrival! The Name of the Game 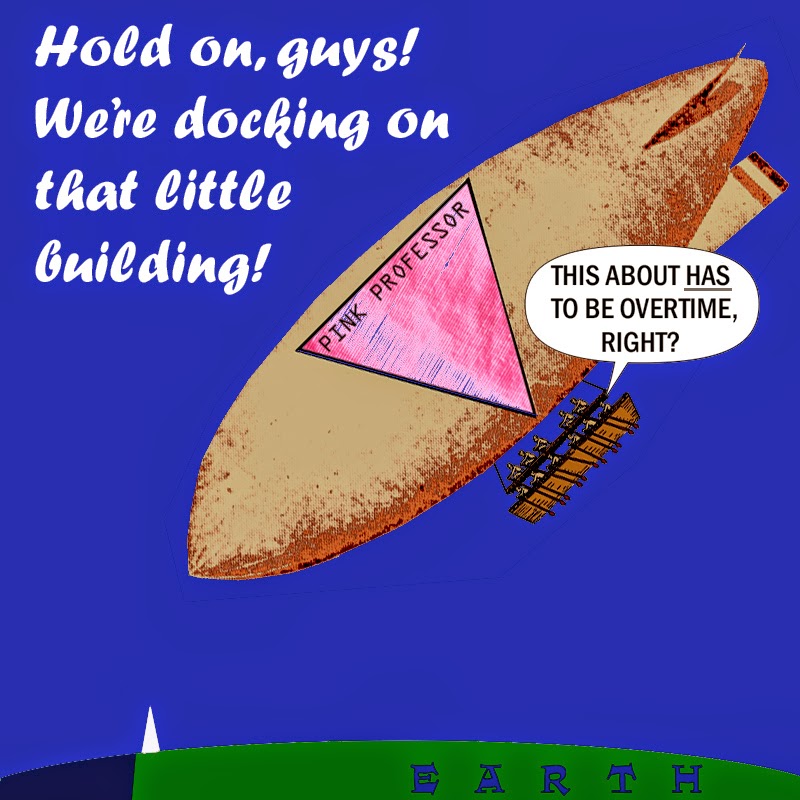 This whole thing, I could've set it to ABBA music, like Mamma Mia.

I recently got the box set of their CDs, and I'm in tears with almost every song -- as Agnetha, Björn, Benny, and Anni-Frid recall the various incidents in my life. My birth, "Take a Chance on Me." School: "On and On and On." The years of acne: "I Saw It in the Mirror." Adulthood: "Should I Laugh or Cry." And, of course, when I first met The Pink Professor: "Gimme! Gimme! Gimme! (A Man After Midnight)." But in this present adventure, I've cued up one very special track...

The blimp's sound system blares forth the song "SOS" as we pass the mixmaster/tangle outside San Francisco, where I lost a piece of my soul in 1975, which in recent years drew The Pink Professor to it. So, yes! he's down there ... somewhere! We pass with searchlights invading, scattering about, and scouring the area, with our ladder dangling free in the breeze.

I can see a large group assembling, coming up from under the bridge, one by one, two by two, and others, with some going back down. Apparently underlings or students or devotees, certainly strays taken in by The Pink Professor, whose drive to nurture and mold character is strong wherever he goes. I can't wait to be with him again!

Our glad reunion is delayed, though, because turning the blimp around is not an easy thing to accomplish. I swear, we're about halfway to Hawaii before we've turned it around for a second pass. They might've prevented Pearl Harbor with nothing more than a blimp in the bay area on cruise control. We come back for another pass, and some of the underlings are once again out, but different ones. Then, in the long process of turning around again, I see the lights of Reno. Finally, we're back for another precious pass, and this time I behold the majestic figure of The Pink Professor, standing there tall, but waving us off, "No! No! Go away!"

I say to myself, "God bless him! He's so dedicated to his work, he's willing to sacrifice his own happiness." Out to sea we go again, back to the Hawaii area, with the Arizona memorial looking as beautiful as it did that first infamous day in 1941. Then we're back for another pass, but this time I've worked my way down the ladder and am hanging by my legs.

Maybe he actually wanted to stay there, but in an impulsive act, seeing my love was very thick -- thick as thieves -- the Pink Professor grabbed my arms and I managed to hold him as we passed Oakland. I have to confess, "Slipping Through My Fingers" ran through my fearful mind. But with an extraordinary effort he shimmied up my body and started up the ladder. Those on the massive vessel cheered us on. I, however, couldn't get myself turned around, so I was left with one dire option, to climb up backwards, like a crawdad.

Sounds impossible, I know, but they kept playing "SOS" and it gave me strength:

I love the driving guitar on that part; it gives me moves like Jagger. I'm telling myself, The love of your life is directly above you, climb with all your might, just as the crawdad makes his way under his rock, be it easy, be it hard. It's true, crawdads don't take days off. And like the post office, they simply aren't put off by the elements.

We docked for the night at the Transamerica Pyramid Center. If you know anything about San Francisco, it's a big building that tapers to a point, hence the name.
Posted by dbkundalini at 3:09 PM