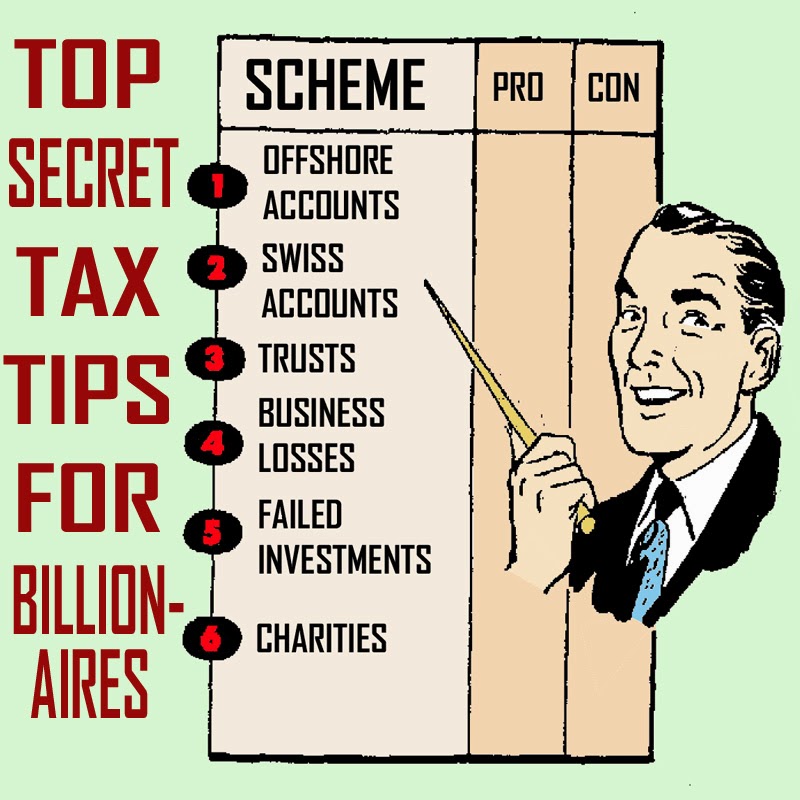 Well, folks, it's here, the day the average guy hates most of all, Tax Day. Oh yes, how well I remember it: The terrible dread, so you put it off till tomorrow, then the next day, and finally have to waste April 15 getting it done.

But now I'm a billionaire, so those days are gone. At least the dreading part. They still expect you to fill out a little form. As I understand it, they didn't always. But a few of you average guys found out about it and wrote to your congressman complaining. Since it was an election year, he was all over the issue, and even bragged about it in his TV ads. "He forced billionaires to pay taxes, just like you." The good news is, since billionaires are too big to fail, they make it very simple. And, frankly, if you end up paying anything, you did it wrong.

My problem this year is I've only been a billionaire a little over a week, after the billionaire gave me $2.1 billion, so I wasn't sure what to do. It was only a couple days ago that I learned the only reason he gave me the money was to avoid his own taxes. Which is OK with me! But he's been very helpful and connected me with a tax guy whose job it is -- we pay him under the table, that's how smart he is about taxes -- to help new billionaires do it right.

Some of the details are very hush-hush, because, frankly, the IRS is always lurking, sometimes as subtly as brown blight on shrubbery. According to the billionaire, they've always got him in their sights. So he dropped me off by a grove of trees, sent me across a field, then past a motel swimming pool that's been filled in (the concrete perimeter remains), and to a particular room. There, the guy came in with a low-tech pointer and a big pad of paper. And gave us the good stuff.

He goes, "If you haven't got at least one offshore account, get on it today. Go to Home Depot, buy a big plastic tote and some duct tape, load it with cash, and find a place offshore to bury it." I took mine to the river, a good place, where I know there's plenty of sandbars. Some of these sandbars have been there for years, not counting the late spring rains that tend to wash them away till June. Right now it's mid-April; everything will be secure till the middle of May. If we're fortunate enough to get global warming, I might not have to dig them up till August.

Everyone's heard of Swiss accounts. You bury a few totes with some Swiss cheese, and the IRS naturally assumes you meant Switzerland. It's sneakier. You make the claim, then eat the cheese, saving all the way. Then there's the setting-up of trusts for make-believe relatives. Like my cousin, Athlete Foote, and my godchild, Ware Wood Shovelby; and a guy from Africa I adopted, Udum Dolt. We met at a Nigerian Independence Day celebration and he looked like he needed a father figure. It's a good story, because at the very mention of Nigeria everyone assumes anything's possible.

Of course there's also any business losses you may have had. My main business is this blog. It's tough to serve the needs of 50,000 needy readers everyday. For example, I hire a dozen guys to handle the emails I get. Everyday there's idiots with dumb questions, like, "Is Strongheart dog food still available?" We Google it and answer him "Yes" or "No," whatever the answer is. Wasting time like that's a business loss. Hiring the guys is a business loss. And if they steal from me -- and I somehow lost a couple Beatles posters just this week -- that comes out of my taxes.

The other category of business losses is failed investments. You should always invest in businesses that are fundamentally unsound and die quickly. Like tea shops, independent mattress stores, furniture stores, and, above all, carpet stores. What these fly-by-night bastards steal is one of the good financial losses, for tax purposes. (At long last I know why carpet stores are always closing.)

The other killer tax shelter is, of course, charities. It takes about 10 minutes to start and register a charity. I've had this idea for some time. Remember, my parents both died of cancer. And the official Cancer Society, with their years and years of collecting for it, still haven't come up with a cure. This leaves me, according to the scheme, with no choice but to create "My Own Cancer Society." And since I own it, any contributions I make technically stay with me. And because no one actually expects you to come up with a cure, no one's the wiser, and cancer victims aren't any worse off.

This year might be a bad year for me, tax-wise. I might still need to pay on my $450 a month disability check, received before I became a billionaire. But by next year I will have rolled that into a charity for the cure of game toes, which is my disability. Because if I come up with a cure I believe I'll be able to live without the government's monthly pittance.
Posted by dbkundalini at 10:22 AM