How He Made His Billions 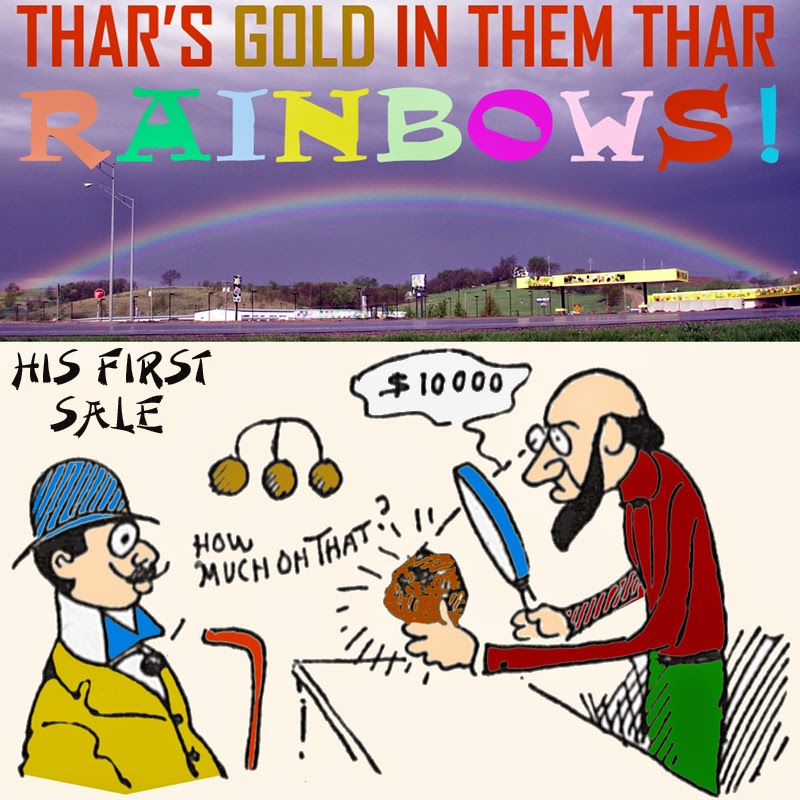 It's been several days since the billionaire came to town. And I've made it my business to be "in" with him and find out everything I can about his dealings. Why am I doing that? Because it's been a long time since I've met someone who could very well be my soul mate. And money has nothing to do with it, although, if I were to be perfectly honest, it doesn't hurt.

But enough on that subject -- the vagaries of soul mating, true love, etc. -- because, frankly, it's a sore subject. I haven't written much about it, but, yes, long time readers of the blog know I had a true love ... once ... although I've never shared what precisely happened to drive us apart. I've already said too much. Let's get back to the billionaire, who, c'mon guys and gals, anyone, you have to concede he'd be a fantastic catch!

Anyway, the whole thing very well could be out of my hands entirely. The fact that we've run into each other a half dozen times in a town this size, that he bought my Easter bunnies and all the rest, was enough to tell me something's happening. With the next thing being he visited my house earlier today. I was so embarrassed; I still had bedhead. And I'm mostly bald, which with bedhead is a terrible look. But he didn't seem to be nonplussed.

He found out where I lived and wanted to come by and "make things right," since I'd erupted at Patsy's Steakhouse when he yet again called me "The Easter Bunny guy." It was a long day, that's all. I don't mind being the Easter Bunny guy, if it's right that a once-a-year activity should define you. In this case, since the billionaire didn't really know me and my many qualities, it's completely understandable that that's the label he should hang on me, as a kind of shorthand sobriquet.

I should just come out and say it, we are fast friends now, OK? I'm batting .1000, the first billionaire I've ever known and we're fast friends! I brushed it off, the whole "Easter Bunny guy" thing. He asked about me and my house, what I do, etc. I didn't hold back. I told him the truth of how I'm on disability because of my game toe. He thought that was cool, but then -- I couldn't believe it -- said he wouldn't mind helping me get it fixed. I had to beg off on that point. I'm not only adverse to pain, I also hate poverty.

Plus, I wanted to know more about him. How a guy can be a billionaire. What happens that makes you so filthy rich? Is it true what they say, that once you have your first billion the rest just happen? Good news, he said, that's exactly what happens! But he never stays still, resting on his mountains of cash. He's always looking for more. I think he saw a twinge of discomfort on my face. "That's not to say I obsess over it ... I want to live life to the fullest in small ways too."

Was I charmed? Yes, absolutely, what guy wouldn't be? But, as I said above, I still have this place, this hole in my heart, and I'm not sure at this point that anyone else can fill it. Damn it! And he has to be a billionaire, too! But we're leaving it at that, agreeing to be friends, do things together, yes, and take the rest of it slowly. Already he wants me to go with him on some buying trips around town, and he said he'll show me a good time. "But what about your game toe?" he asked. I told him, "Don't worry about that ... My tootsie-wootsies are feeling no pain!" We laughed, marking the first time in my life I ever saw a billionaire's eyelashes flutter.

"So where did you get your billions?" I asked. "Was it an inheritance, a well-paying part-time job, what?"

He looked around, suspiciously. We lowered our heads to the table and pulled in together. I believe I can publicly reveal his whispered confidential answer: "Rainbows. That business about the pot of gold at the end of the rainbow ... That's only half of it ... I can get all the gold I want, which, as you may know, is one of the most precious elements on earth..."