The Billionaire Could've Been Anything 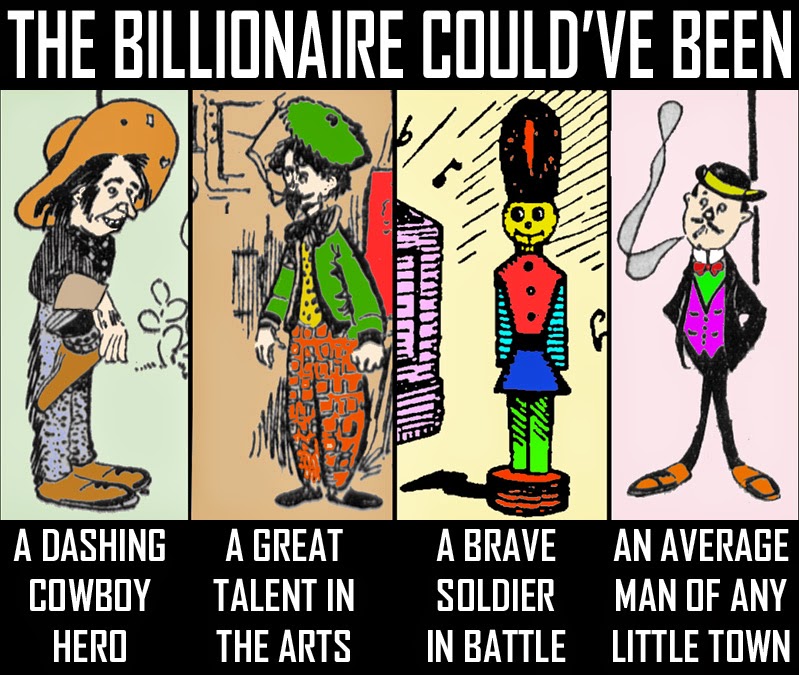 It's been a lazy Sunday afternoon. The billionaire's been hanging out at my place. He's usually a fireball of activity, but like everyone he has to cool his jets sometime.

This is what I like. It's what I liked when I was with the Pink Professor, doing nothing in particular, just hanging out like two old slippers. Small talk. Comfortable body language. I looked over at the billionaire, wondering what his dreams must be like. I hope they're not all of exploits and conquests, the next gold-laden rainbow, etc. As much as I like the billions, I'm still a romantic at heart, and like to slow down.

Anyway, there he sat -- the man himself -- a guy with the world on a chain. Even without the billions he'd be a great guy. I can picture him a total success no matter what. Having him asleep gave me time to think over the possibilities.

How about a dashing cowboy hero? Of course he wouldn't be from this generation. We have cowboys, but there's very little call for them to round up rustlers or head off bank robbers at the pass. In which case we would've never met. But he could've been in the Old West. He has his feet on the table at the saloon, dozing off. There's a guy there saying, "Even if he weren't a dashing cowboy hero, he would've been a success at something. Like if he lived in the far-off future, an important mogul in the world of high finance. I'm picturing him as an eccentric billionaire." Then the future goes fuzzy, our cowboy hero wakes up, tips a glass of whiskey, and takes off to protect water rights for the settlers.

Or he could've been a great talent in the arts. Since to be a truly great artist you have to let yourself go, and not be afraid to face the scorn. As for me, I've never let myself go in the arts, so I haven't painted any masterpieces. I've had a blank canvas for the last five year and I'm afraid to touch it with paint. The billionaire might've been born in France, like the guy in the illustration obviously was. He has that look of French insouciance. He's there in France, doing art, with many fans. One fan wonders, "If he weren't such a great artist, I wonder what he might've been. He's too eccentric to ever be wealthy. He'd waste his money in a second and be found drunk or dead in his garret. As it is, he needs a keeper! He'll get knifed in a bar yet!"

I can also see the billionaire as a brave soldier in battle. Brave in the extreme, because he has very little reserve; if he wants something he goes for it. His wealth proves that. It's no stretch to imagine him as instrumental to a major battlefield rescue. The commander says we need someone to run through that minefield and carry out our fallen battalion. He can't do it alone, so he goes to a farmhouse and barters for several stallions. Which he lashes together side by side, then he steps on the middle horse and drives them into the fray. The battalion sees him coming, and they're ecstatic, shouting their admiration like, "That crazy son of a bitch! I never seen such a beautiful bastard!" Even the enemy's beside themselves. Meanwhile, back at the farmhouse, the farmer's telling his wife the story: "That guy could've been anything, dammit, I'm tellin' ya! A cowboy! An artist! In the future, a billionaire!"

Finally, the billionaire could've been an average man of any little town. I have my doubts here, but there's no telling. My dad was an average man in a little town, and he was extraordinary in various ways. He met my mom, and believe me, other guys didn't! So who's smartest? Obviously, my dad. But the thing about the billionaire is, What would he have done as an average man of a town? Even he might not know. He would've paused, thinking, and really going over it: "Is there a place for me in the arts? Or perhaps the military? Anything would be better than this trash route! But it pays the bills, and people like me. They honor me each time as one of the nicest guys they know. And that's success as well.

I was about to go on ... forever ... when the billionaire woke up. Being a genius, he saw I had something on my mind, and goes, "What'd I miss?"
Posted by dbkundalini at 3:43 PM