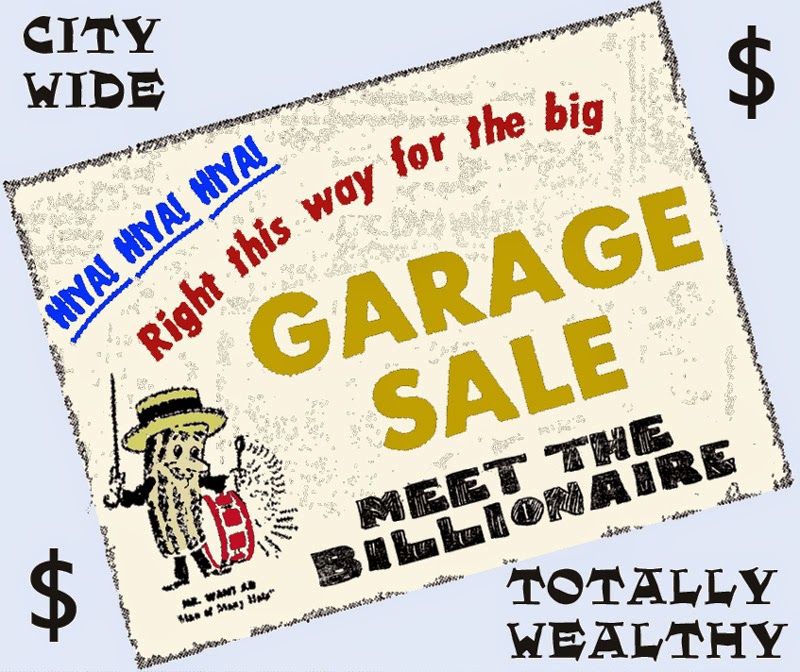 You probably saw the signs today all over town, on every post, tree, and stump, trumpeting a fantastic event -- a golden opportunity -- to see and meet the billionaire. It was so great. The Daily News contacted me and the billionaire, to see if he'd kick off the official garage sales season in style. I, being a big fan of garage sales -- at least back before I myself became a billionaire, and can now afford better stuff -- thought it was a great thing to do.

I've never been a fan of billionaires sitting in mansions behind large gates, if they don't have to. I like it when they get out and mingle with the hoi polloi, and give them something to hope for. Plus, it's worth its weight in gold for the billionaire, potentially, in the off chance there's a revolution and they're coming for the billionaires to take us to the guillotine. I want the little people at least to consider sparing our sorry hides, and certainly that of the billionaire, because we were so kind to them in good times, when we could've crapped on them, as the rich normally do.

Frankly, the billionaire's been wealthy for so long, and lacking nothing, that he's forgotten how the average person lives. Hand to mouth and looking for bargains where they can, even if it means standing in other people's back yards, finding something we need and talking them down to a quarter. How often I did it myself, back before I had my $2.1 billion.

How embarrassing it was, though, when we walked up to the first garage sale and the billionaire simply announced, "I'll take everything," leaving everyone else discouraged and angry. A few of them came up to him to "meet" him still, but only to give him a piece of their mind. I didn't care for him doing that, but, honestly, he could do it if he wanted. He was a paying customer, too!

Still ... I didn't say anything, but I'm sure I flushed red in the face and was embarrassed. He did better the next few sales, and people were happy. Later on, then, we hit a garage sale that to me was worthless, having a lot of ladies clothes, baby clothes, knickknacks that someone might've had in their bathroom, etc. And other stuff that I've always hated, like 2 liter bottles with a doll's head on top and the rest of the body covered by its knitted dress.

Again, I was completely embarrassed, and even personally aghast, when the billionaire announced, "I'll take everything." This time I pulled him aside and said part of the etiquette at a garage sale is that you only pick out the things that you want, leaving the other things you don't want for someone else who may. He seemed perplexed. He'd done it as an act of mercy, since he thought they'd waste their whole day and not make much.

OK, I can see that. And I suppose if I were having a garage sale and someone came and bought everything, I'd like it. After all, I'd be able to get on with my day. We had the same thing happen at the craft sale, when the billionaire bought everything, and it didn't bother me. The big difference is that there were others at the garage sale who were interested and browsing. They left angry.

It's worth some further analysis. Another downside would be, say, I want to have a garage sale the next year, and the billionaire doesn't show up. I don't want the people to be so upset about what went down last time, so they wouldn't come back. It can be nerve-wracking, the things you have to consider when you have garage sales. Public goodwill is a big part of your reputation.

But the whole concept has given me a great idea, with the state's largest book sale coming up on the 16th. O! I feel so much ... opportunity ... and evil ... flowing through my mind. I need to retire early today from other billionaire activities, yes, to consider my options, and how it would be done, if I decide it can be done. Thank you, billionaire! Your example has just brought out the best (or the worst) in me!
Posted by dbkundalini at 2:24 PM