Billionaires Going Back to Adam 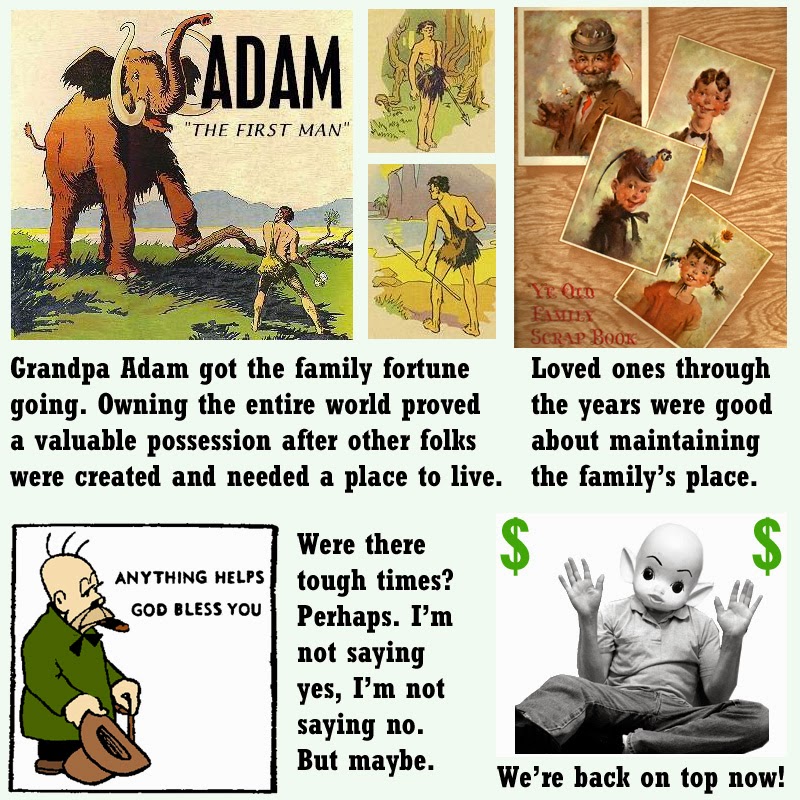 The stories of families are the stories of up and down. You get one generation that's really disciplined and diligent, and invariably they're billionaires. Then you get the next generation, and they're a bunch of slouches, who can't be bothered. They while away the time, never caring to develop even the slightest discipline. And with them, the billions are soon gone. That's a billionaire's sorriest experience, to leave his money to a bunch of ne'er-do-wells, doomed to immediately lose it.

We just need to quit dying, people like the billionaire and me. Because if it wasn't for people like us, I dare say, the financial gods would've wiped out mankind long ago, and there'd be no one to carry on the ways of wealth. I see the bad side of things all the time, though. I can't give society a good report. The mass of men lead lives of quiet desperation, and they haven't got a "give a damn" spirit. The spirit that motivated the pilgrims, the pioneers, and our other can-do ancestors. Back then, someone would say, "Do you give a damn?" And they'd answer, to a man, "Hell yes!" But not these days.

I look back, way back, and I'm happy with what I see in my own family line. Yes, we had a few rotten apples under the tree. But the rest of us were so completely brilliant that nothing they did could spoil the bunch. There's the generations I knew personally, billionaires of hardy stock, who earned their fortune the old fashioned way, through the sweat of their brow. And I heard the old timers telling about the billionaires before them, who remembered earlier generations, and on and on. According to one of my uncles, he traced our line back to Adam himself, using the Bible and Ancestry.com. The vast majority of those generations were billionaires.

Adam himself was of course a billionaire. Even if he didn't have a cent of money. How so? There was no money yet. But he owned the entire planet, every inch of real estate. He'd go out to check his world occasionally, when it was one solid land mass, which he named "Gaia." Then as folks were created and/or born around him, he'd sell them land, pocketing the proceeds and living frugally. He sold Asia to the hordes and never looked back.

As an aside, wouldn't it be fun to be a kid then, and be able to jump between South America and Africa? Always careful to not get trapped on the opposite continent if the drift was especially dramatic. I heard of some of the politics of those days. They had two basic parties, the Angels and the Devils. The Angels kept saying, "It looks like we've got a severe case of continental drift on our hands." But the Devils refused to recognize the basic science, saying, "That ever-widening wet divide isn't really there." True story, even if the translation from Ur-Language -- grunts with tonal variations -- is admittedly free.

The upshot of all this is, my people have always been billionaires, or on the verge of their first billion. You ask, Why did your family seem so poor in the Depression? I explain it like this: They didn't want to show up their friends and neighbors, so they put the big bucks away. Any display of wealth back then would have been seen as overly-ostentatious. So out of mercy, they pretended to have lost everything in the crash. But those "hard times" also helped my family, teaching them greater discipline. And added to their wisdom when the times were right to show their wealth once again, as well as making more, with everyone else in such dire need.

All in all, being extremely wealthy is very sweet.

So we go from the beginning of the world and Adam and all his billions up to me, banking $2.1 billion this past week alone! Certainly I'm very happy and have limited worries. If I need something, I buy it. That's how it is. If I don't need it, I buy it in case I actually do. It's all good.
Posted by dbkundalini at 3:45 PM