The Science of Rainbow Gold 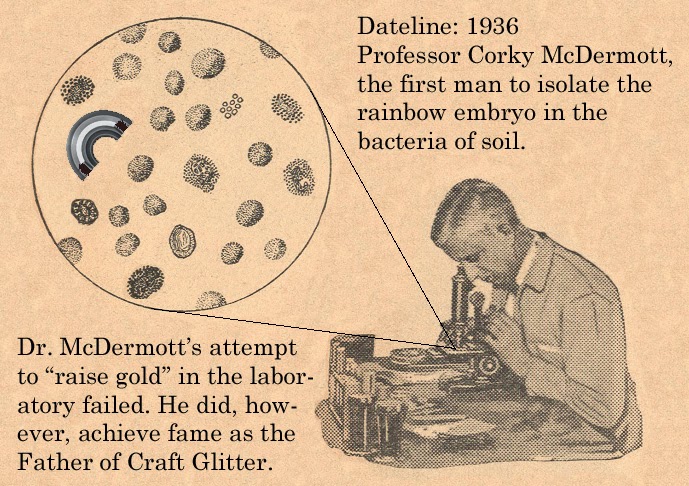 This is my version of "The Science of Rainbow Gold," based on what the billionaire told me. I didn't take notes and I'm writing it with the disadvantage of a bad memory and very little understanding of science. I didn't do so great in school. But there's one thing I know for sure: The billionaire is a very rich man, so if he says it, it's good enough for me.

Everyone knows there's a pot of gold at the two ends of a rainbow. In the 1930s that fact intrigued scientist Corky McDermott. He performed a number of groundbreaking experiences, literally breaking ground where rainbows had appeared. Using a microscope, a device geared to see beyond the capabilities of the naked eye, he came to two conclusions. First was the realization of his own gigantic size compared to microscopic things. And second was the presence of rainbow embryos in those areas. He pushed his powerful lens up to 300x, nearly its breaking point, and also beheld the nascent pots of gold!

You see something like that, it knocks you on your ass, unless you're really stupid. And Prof. McDermott obviously wasn't stupid, being a scientist with access to a microscope, and the knowledge of rainbows that followed. He could only come to these obvious conclusions: Rainbows start out embryonically a bow because at maturity their ends will be the heaviest points. The middle will be lighter, but the golden ends heavier. In further studies, he concluded that the gold veins reach up quite a ways, replenishing the pots after numerous storms.

The billionaire, browsing a dusty old university library one day, stumbled upon Prof. McDermott's long-forgotten research and arrived at some conclusions of his own. Rainbows do appear in the same places, consistent with McDermott's embryos in particular places. If a guy staked rainbows out, even when they became more or less invisible and sunk to the ground, whatever membrane or sheath that enclosed them would still be physically present. "What if a guy with a box cutter or chainsaw went there, made a few incisions, removed some gold and stitched it back up?" he asked me. The answer, "The rainbow would be none the wiser, it'd pop up during the next storm, and replenish whatever was missing, making it a virtual ATM!"

"Yes, naturally, of course," I thought. Then if a guy were to buy the land, and have several hundred rainbows he was monitoring at all times, he'd have enough gold -- countless tons of gold -- to live something more than a merely comfortable life. He'd have more gold, in fact, than he could reasonably sell without raising eyebrows. That would be true for almost anyone, but, I will proudly say, not the billionaire. With his matchless personality, suavity, coolness, and great looks, he could simply look you in the eye and you'd buy all the gold he had, no questions asked. Remember the great Fort Knox expansions between 2002-2008? That was all the billionaire!

I listened to him explaining this and had to kick myself. Once upon a time, without any knowledge of these things, I was actually on a team of Rainbow Chasers. And we came damned close to discovering some of this. It happened one time only, since rainbows are hard to find. We came up under a rainbow. We looked up and it was huge. I could tell it had a sheath holding it together. And there was a loud clicking, hissing noise, that, frankly, scared the crap out of us. We thought it might blow up! I was afraid it was some kind of electrical typhoon, or something, and that one bolt of lightning would blow us to kingdom come. Now I see it was just the internal regenerative process of making gold and moving it in place. And we did see the pots that time, but they were empty, explaining the regenerative process.

Listening to the billionaire was fascinating, of course, but I was getting a little tired of nothing but science. All work and no play makes me a duller boy than usual. I'm thinking, "You've got all the money you need, let's do something fun..." Still, it was kind of fun watching his flashing eyes as he spoke of these great truths. Then when he'd relax a moment, they were especially dreamy.

"Let's talk about the science of coffee," I ventured, "as in going to your place downtown for a couple free lattes!"
Posted by dbkundalini at 10:08 AM