The Billionaire Loves His New Steakhouse 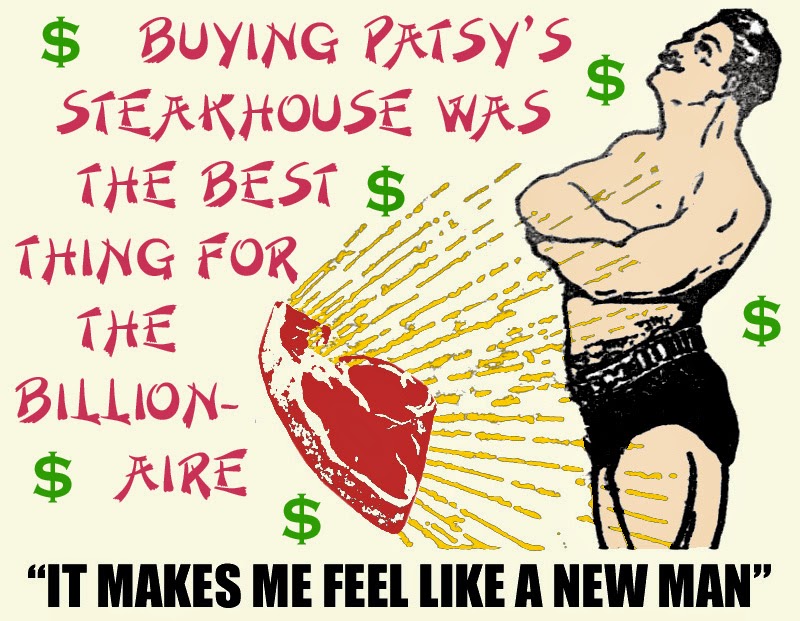 Here's a recommendation, in my words but straight from the mind of the billionaire: If you ever become a billionaire, you really must buy your own steakhouse. There's lots of things money can buy -- cars, planes, houses, politicians -- that'll never make you happy. But a good steakhouse never lets you down.

I was there ... And I know what I saw ... Of course I'm talking about Patsy's Steakhouse, the place on the east side of town, for my money the best steakhouse we have. And that goes double for the billionaire's money. Patsy's getting old, and ever since Ray died she's deserved more than this, a life of watching big mouthed senior citizens shovel it in, then going home alone. The billionaire asked me about it and I said, "I would," meaning should he buy the place outright? Patsy named her price and that was it, along with a few details about the deed.

I should back up a bit before I say that I sat down with the billionaire for a nice juicy steak. I was already at Patsy's, in the foyer, when in comes the billionaire and his retinue. He sees me and recognizes me, the second time in one day, and goes, "The Easter Bunny guy!" I motioned him over by the restrooms and told him in low tones, so as not to embarrass him, "Listen, bud, if you call me 'the Easter Bunny guy' one more time, I'm gonna kick your ass till you're walking on your hands. I'm so much more than that."* He studied my face for any shame I had, and seeing none, goes, "Point taken."

Then he bought the place and we sat down for a nice meal, on him. With each bite, first one, then another, then another, my eyes rolled back in my head and I was gasping for air. The billionaire matched me climax for climax, the meat was that good, and of course tender. You never want meat to melt in your mouth, but you do want a tenderness that at least hints at melting. Then you look down and see what's left. You hope it's a lot, but sooner or later, barring a miracle, it's down to the bone, or nothing. I lifted my shirt and showed the group my puffed out belly. The billionaire lifted his shirt, too, then outdid me by disrobing to his shorts and energy belt and exulting in the moment, "I feel like a new man!"**

I clinked my glass and called the whole restaurant to silence before raising my iced tea and proclaiming, "To the billionaire!" There were voices of agreement in response, the lower tones of men, the medium tones of women, and the higher tones of a couple kids, who somehow were unable to go to a sitter, or not trusted enough to be left home alone with their TV, video games, or computer. You see a family like that and you remember back to your own youth, stripping naked when the adults left and streaking around the timber with cousins. But I also missed many a steak dinner... 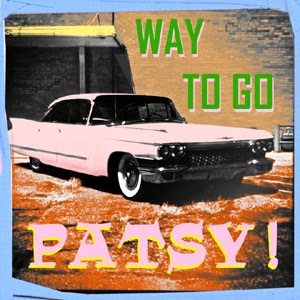 Now that we were fast friends -- The Billionaire and The Easter Bunny Pauper -- there was no telling what the future held. One thing I knew, once I became his most trusted confidant, both our lives would be enhanced.** He really appreciated me threatening to kick his ass.* But I know enough about group dynamics to know I'll need plenty of other gambits.***

As we left the steakhouse, my heart was glad when I looked up and saw Patsy drive by in her cool collectable pink Cadillac, the first fruits of her labors in building a steakhouse a billionaire would want. Such a wonderful guy.

All hail my friend, the billionaire and his ass*, as yet unharmed.