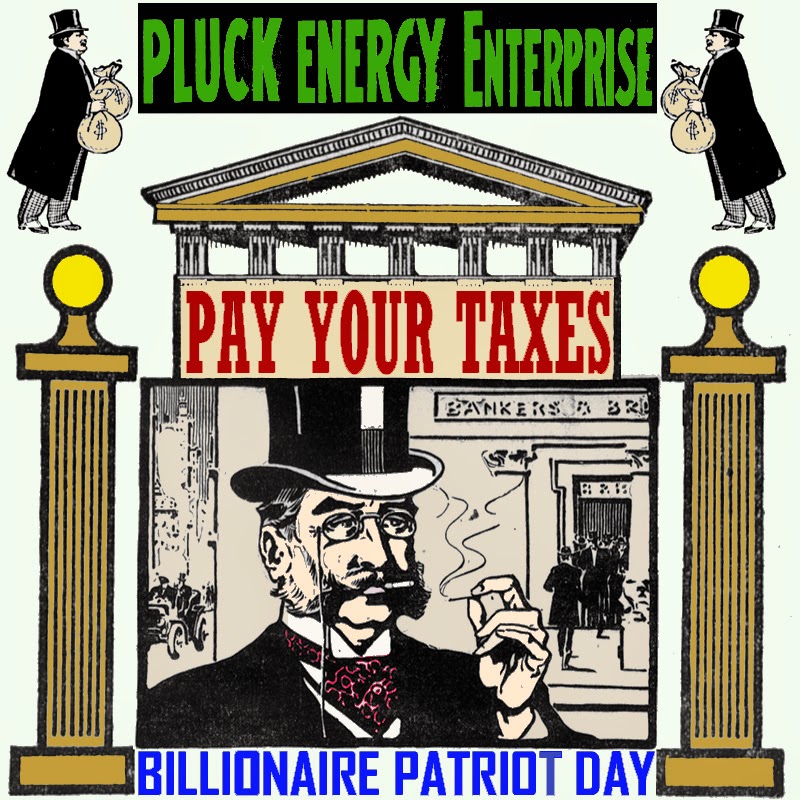 Today, April 14, of course, is Billionaire Patriot Day, coming as it always does the day before tax day. And this year, as in the past, we billionaires want to remind all Americans that tomorrow indeed is tax day, with our message being, "Pay your taxes."

It is important for our nation to have a sound fiscal foundation upon which to rest and from which to grow. The billionaire cannot do it all on his own. As has been true from the nation's founding, it takes all of us if we are going to be the success in the world that we need to be. The billionaire shows he's got what it takes, "PLUCK ENERGY ENTERPRISE," and now it's up to the American people as a whole -- rich, poor, dirt poor, or somewhere in the middle -- to show they have those same qualities.

Everyone knows that the billionaire is exceedingly rich. He measures his money in numbers that are inconceivable to the average person. If it makes it easier for you, a billion dollars in dollar bills -- depending on how much space you leave between them -- would stretch from here to infinity and back, then make a circuit around the world 10 times before boring through the moon, skirting the sun, and coming to an end at points unknown. Try spending that kind of money; you have to do it in huge chunks if it can be done at all. And most billionaires have more than one billion!

It sounds like a lot, and it is. But the billionaires know the truth, that their wealth is actually a drop in the bucket compared to the combined wealth of the American people. Their combined wealth is so much that there's no way to illustrate the amount. Were we to plot a similar journey, how far it would stretch, there would be no end to it. It'd sound absurd, something like this, "Around the sun an infinite number of times, filling every crater on the moon an infinite number of times, and finally never coming to an end."

So while the billionaires of society are always heroes -- job creators, social exemplars, and patriots -- it is the American people who are the truest heroes, but only when they pay their taxes. If they're skirting the law and cheating America -- by itemizing deductions, etc. -- they're really only cheating themselves. They're throwing away their heroism, and leaving us very much ashamed.

You basically have 24 hours until April 15, to get your tax returns out, and correct any errors, misstatements, and outright fraud. 24 hours to be a hero and not a goat. 24 hours to avoid debtors prison, regular prison, and public shame. Make us proud, as you always have in the past. We want to be proud of you. And we shall make you proud of us.

Note: I have given my blog over to the above press release from the Billionaires of America group. But I want you to know, I agree with every word, and wish to assure you that I also will be proud of you for paying your taxes tomorrow. You know it's right, just do it. Don't cheat. Pay your full share. Then even if you go broke, at least you'll be proud.
Posted by dbkundalini at 8:56 AM