Even Old Maude's Happy for Us 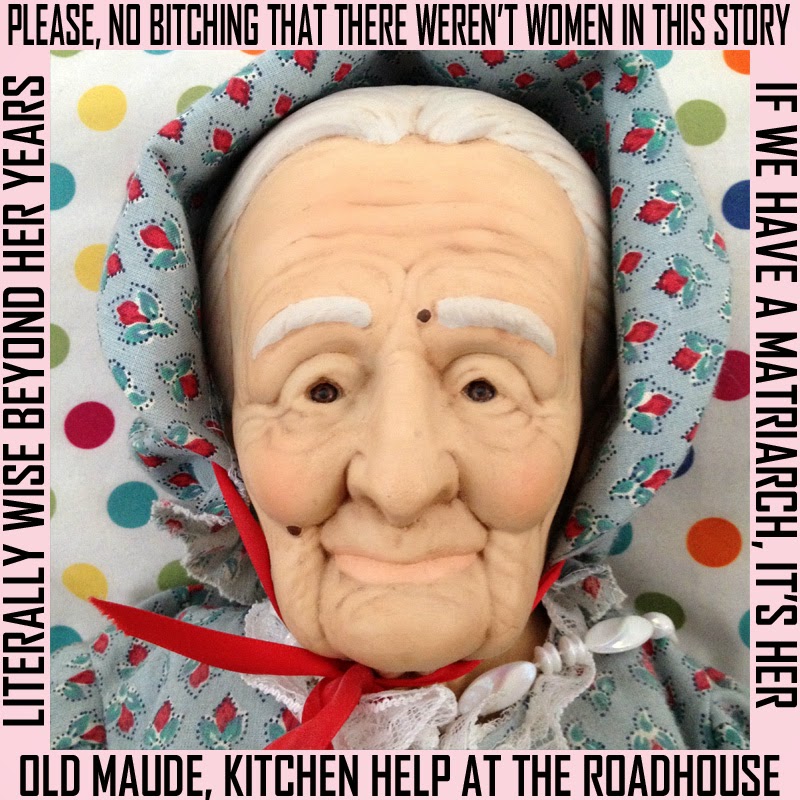 Our happy ending hasn't ended yet. We've got a few more days of April and we're going to milk it for all it's worth. Anytime anyone's happy, that's what you should do, because sadness, heartache, and pain are looming in the future for all of us. But today we eat, drink, and be merry! Let's live it up in April, and ... let May take care of itself.

We pulled the blimp into the new blimp port on the west side of town, just north of my $20 million personal library. Townspeople were all around to welcome us back. There were huge cheers for the billionaire, bigger cheers for me, more subdued cheers for almost everyone else, then extremely huge cheers for The Pink Professor. He'd been gone so long, they couldn't help themselves.

Construction teams had erected bleachers and a platform so we could address the folks about our splendid journey to San Francisco. For my part, I read verbatim my blog posts for the last few days. There were lots of oooos and ahhhhs in the crowd and excitement was at a fever pitch, particularly on some of the more harrowing accounts, like when I had to climb up the blimp ladder backwards like a crawdad.

We then were off for a gala whirlwind reception at the downtown coffee shop. The shop belonging to the billionaire, the employees were glad to see him return in one piece, so they'd get their checks. Next we went to Patsy's Steakhouse, also owned by the billionaire. The steaks were great, and, like the coffee shop, there was real relief that the boss was safely back and able to pass out checks. Finally, toward mid-afternoon we were at the Roadhog Roadhouse, which, I believe, either I or the billionaire owns. (I just checked, and I personally am the owner of the Roadhog, according to the post, "The Bikers Bar Is Now Mine." The fact is, when you're a billionaire it's very hard to keep track of what you own.) The employees there were glad to see both of us, but it seemed like they assumed the billionaire owned it. That's OK with me, I've a forgiving guy; I wouldn't forget their paychecks over such an understandable slight.)

The Pink Professor, who worked at the Roadhog for several years, before his disappearance to San Francisco, got the biggest reception. The place erupted when I raised his hand in victory and we kissed. A few others came in from the back court and we had to repeat the scene. The place erupted again. Then a few stragglers, who'd been in the bathroom, came out and we had to repeat it again. Three kisses, three grand ovations! Then I started going, "Where the hell's old Maude?"

One of the cooks confides in me .... he didn't think Maude was all that cool about public displays of affection .... of a certain sort. I thought, "Oh, I get it."

Let me say something important here. The whole story this month, I've been told, hasn't had very many female characters or interaction. Yes, I mentioned my mother once or twice, and there was Patsy from the steakhouse. But by and large, it's true, it's been male-dominated. And while old Maude can't make up entirely for that lapse, certainly she's better than nothing. So we're going to bring her out, and put her on the spot, and see if we can bring her around to celebrate our love.

The whole place joined me in chanting, "Maude! Maude! Maude! Maude!" Finally, out she comes, and the place erupted. She was wiping her hands. "Yeah?" she deadpanned. I looked at her, as if to say, You're our treasure. She came over, then sensing The Pink Professor and I were about to kiss, leaned forward and we both "accidentally" kissed Maude's cheek instead.

Old Maude brought the place down when she wisecracked, "See, you two can kiss girls!"
Posted by dbkundalini at 3:28 PM