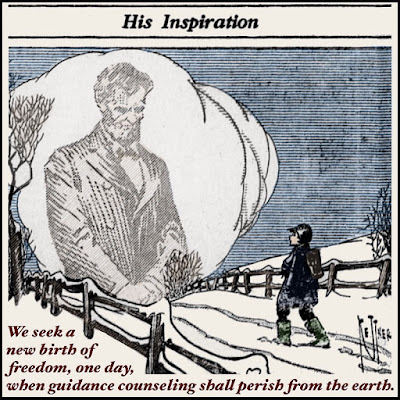 I’ve long claimed Abraham Lincoln as my spirit animal. And in spite of the pathetic pleas of those who think they know him better — scholars, historians, and other self-appointed busybodies who never even met the man — I’ll keep right on believing and living in strength through that truth.

Like Lincoln, I’m a person of many dreams. I’ve been dreaming since I was a kid and I believe in dreams. Many are scary, doubts whether I will withstand the challenges of the future, etc. But a lot of my fears I’ve put away, such as the childhood nightmares of Judgment Day. They pop up maybe weekly, but a few good screams and a tiny bit of crawling the walls and it's all over. That’s on my parents, of course, for taking me to church every time the doors were open. It might’ve stunted my childhood, but in a way I’m happy for it: It's a killer excuse for anything that goes wrong.

I used to wander in the snow like in the picture and think, think, think. Some very practical things, such as “What should I do about these boots, so kids won’t make fun of me for having big clodhoppers?” I remember once taking them off and slogging the rest of the way to school in Hush Puppies, which were ruined by the snow. The lesson wasn’t to quit worrying about what kids would think, but hope Mom found better boots.

All the time I was thinking, huffing and puffing: Would I die in the snow? Would class be OK? Would I be able to skate by another year, then be promoted? What would it be like in high school, when I’d be faced with all sorts of things — higher learning, dissecting frogs? I could only imagine it as a kid. I imagined the older kids at school towering over me. They seemed to be laughing, not crying. So whatever was to come, I’d have to manage.

Then high school had a lot of downsides, of course, really apparent when the guidance counselor showed his ugly head. But he had to earn his bread like everyone, meaning, when you’re guidance counselor you have to instill in kids a terrible fear of the future. Always hinting they’ll never make it unless... And then you get the scary bully tactics, laced with criticism, taking advantage of your innocence. “There are those who make it, then there's the vast majority who fall dead on the way.” Which finally explained the ditches full of corpses every time I went to town.

Is that any way to do education? It is if the goal is to keep one-time barber-college, wrestling-coach wannabes who settle for counseling and guiding students with barely five cents worth of personal decency to rub together employed. My big problem wasn’t native ability and lack of drive, but someone to walk beside me and not to kick me in the snow when the bell was about to ring.

So Abraham Lincoln towers above, whom -- if my vast historical knowledge still holds true to the facts and isn’t touched with Alzheimer’s Blessing, sweet forgetfulness, and a soon sinking into insentience and a calling home by the Lord of Judgment Day that I glimpsed so long ago -- was the 16th president. Which rankles everyone a bit that he’s so far down the list when we celebrate his day and Washington’s like they were contemporaries. Spoiler alert, Washington was already dead and moldering before Lincoln's dad took it out!

But the guidance counselor and I, though from different generations, were contemporaries. And my contempt for him to this day proves it. I’m even somewhat provoked right this minute, even though that stale dude's been dead these many years, to walk out in the snow right now, if we had any, and call out to the skies, “What’ve you got, Guidance Fool!? Something better than Lincoln?!”
Posted by dbkundalini at 6:40 AM