He Took The Guidance Counselor Job 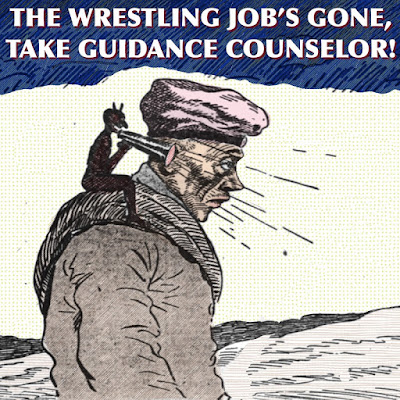 Welcome, Trauma Fans. Glad you’re here, hope you stick around and see what it was that Once Upon a Time upset me terribly, and even still today makes my blood boil or at least get warm.

My traumas won’t be as bad as some of you have suffered, I’ll just put that up front. So I don’t want to hear you saying, “That’s all you got!? I suffered X, Y, Z, and even now he’s still in the bedroom with a machete!” In your case, please don’t take time to reminisce, but call the proper authorities and get help. My thing isn’t nearly that bad.

Even though it’s not as bad, in my opinion it’s still bad. Because my thought is that adults, especially in the educational field, and particularly in the guidance counseling field, ought to be respectful of the kids they serve, and do their work with only positive interactions toward them. Do I get fed up with kids and their pesky problems? Of course, but I don't have very many interactions with kids. And I’m not a teacher and definitely not a guidance counselor.

OK, here’s the situation, a long time ago... At some point, the guidance counselor had gone into the military. I’m going to say he was in Korea, the war that was going on there. Then he got out and got a college education, apparently involving an education degree, likely with a sports minor. At some point he ended up in my hometown, applying for the job of wrestling coach. I will offer some surmises about wrestling coaches, but not here. When our anti-hero missed out on the coaching job, he accepted instead the guidance counselor position.

Flash forward however many years it would be and I show up at school. Then at home, over a course of weeks, I have a series of seizures. Next, back at school, the boys of my class were required to take a semester of wrestling, in P.E. (Physical Education class.) My mother thought the stress might provoke more seizures in me, so I was excused, only to be placed for that hour weekly with the guidance counselor. Who seriously thought I should be wrestling instead of sitting with him. At this point some of the details of my interactions with him have been mercifully forgotten, but that’s roughly it. He didn’t act like he liked me and I didn’t like him. He made me feel terrible about being there.

OK, on my graphic today why do I have the guidance counselor looking so sad that the wrestling job is gone? Not only because he didn’t get the job, but because I contend that wrestling coaches are in it primarily for other benefits, involving female fans. Which would make my guidance counselor a discouraged lover boy missing out on the extra goodies. See his problem?

And maybe he should’ve been the coach. He hid his disgust of me when anyone else was around, so he was good at keeping secrets. Perhaps he could’ve just as easily hidden his secret life with the ladies as coach. If only he had the opportunity! It’s funny how that was denied him. One can only hope he got his satisfaction somewhere else over the years, and was caught at it. But I never heard anything more about him after graduation.

Except to Google him and see that sometime since me being a kid he died. But please don’t feel sorry for him for that cause. Because everyone eventually dies, the good like me someday, and the bad like him way back when. He was older and statistically that’s when it most often happens, when you’re old. But sometimes when you’re young and stupid. Or young and through no fault of your own, you name the cause.
Posted by dbkundalini at 6:00 AM