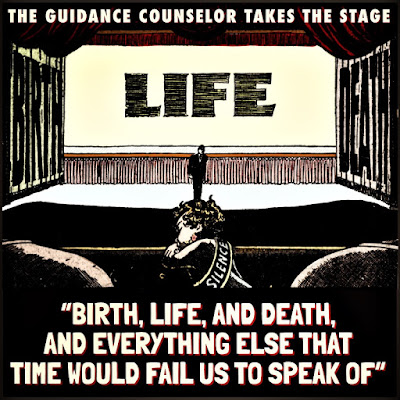 As the school year winds down at Dump Overlook High there's a big assembly, with the guidance counselor offering his thoughts on the year just passed and his vision for the future. The natural assumption is that he has lots of wisdom and will draw something good from it for our inspiration.

The year I graduated it was a big production, with me even having a part in crafting the grand backdrop. I’m proud to say the backdrop hadn't always been so lavish. Some years it was no more than a few pathetic sheets of paper tacked to the front of the podium with illustrations like the sun, moon, and stars, a sky motif illustrating the passing of the years and our hopes and dreams.

My year was a much bigger deal, with a huge backdrop on Birth, Life, and Death. The scheme was almost philosophical. Birth is over here on the viewer’s left, the beginning. Life is the indeterminate span after Birth, which unfortunately leads — varying from person to person, depending on his or her susceptibility to whatever's catching, everything from polio to gonorrhea and its associated itching — to a possibly brutal and painful Death. It's humbling to think of some of the ways you can die. I knew a guy literally decapitated! Never knew what hit him. Only knew, whatever it was, it was fast...

For the assembly I was privileged to work on the DEATH sign. They even put me in charge of it! A little sop from the guidance counselor, I later thought, to give me a deeper sense of my native aptitude, a lesson in sticking to a job, and encouragement that I could oversee something successfully. And I had very little help with it. I hate to ask people to help, but there were a few kids who were also at loose ends and we were cobbled together for the project. A few of them mixed the paint and the rest of us daubed it in, making, I’m sure you'll agree, a nice tableau.

I had a lot of pride looking at it as he spoke. I kept thinking, It could’ve been better. I saw a few streaks that should’ve been touched up. But there was a deadline and we didn’t have the time we needed to pour into it, with classes and tests and the fact that people have a social life, dates, dealing with hormones, etc.

Still, I thought proudly, it looked pretty good! Especially if you figure in the guys who did the BIRTH panel didn’t put in half the sweat, and as far as elbow grease they also had the short end of the stick. The LIFE team did a great job, but they had a lot more people. And anytime a panel is central to a presentation, of course that’s where the resources will go. Like being born on third base, it’s not a great feat if you’re first to score.

And think of this, everyone’s down on DEATH. We’re not supposed to think of Death like we think of Life. So instead of being on third base, it’s like being stillborn from the get-go, having to claw our way up from the slime, hunkering down and pushing forward despite the obstacles, and having to even justify our existence! It’s obvious if it weren’t for the whole scheme of BIRTH and LIFE they would’ve left DEATH out all together. Which isn't fair but it’s a fact. Meaning, actually, as far as everyone was concerned, we were on the project by forced necessity, not something to be proud of.

Still, you know, as far as these things go, the guidance counselor gave one heck of a talk. Backed by one of the best damned DEATH panels anyone’s ever come up with! Then when it was all over, it was all tossed out, I guess. The landfill guy probably looked at it and thought, Not bad at all.
Posted by dbkundalini at 6:32 AM