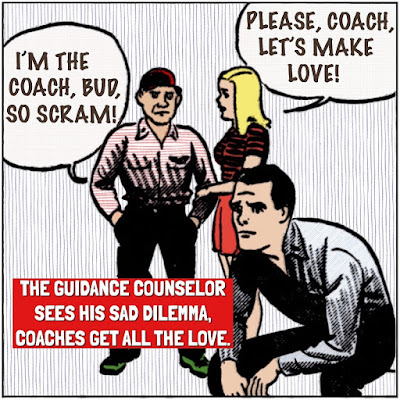 For about a week in the ‘70s, I lived in a town with two high schools and one university. As part of a research project I had volunteers (minimum stipend) following wrestling coaches. Note: It’s hard to do, because so often they’re behind doors where their activities are unseen. It is at these times most often, we surmised, that they’re having illicit affairs. Hence, there’s nothing to be seen except the partner arriving or departing, with nothing conclusively proving that they were there for bed sport.

I got only minimal credit until I found and used information from a wrestling almanac, briefly in print but quickly confiscated, with two pages of enlightening statistics on wrestling coaches, their affairs, how far their mates were willing to go on the mats, etc. Unfortunately, late one night a gang of wrestling coaches broke in where I worked and stole the almanac and the research. That was before we had hard drives or I would’ve had 100 copies in 100 different email accounts, at the very least.

So what we’re left with is what I can remember and hearsay. Both of which I consider admissible. In short, the wrestling coach has to have a big libido. I hesitate to give the full rationale for that. Except it has something to do with men grappling men and a certain split (awareness/denial) in the average wrestling coach's mind over that of what they're really doing. Libido action is required for admitting and excluding.

Beyond being merely interesting in wrestling terms, the study touched generally on how narrowly the mind can focus and fully function with awareness while not excluding but not fully recognizing simultaneous denial. Good stuff. As for me, I was happy I had the seizures, because I immediately saw the whole scene in its stark all together without studies.

Why the guidance counselor ever wanted to be a wrestling coach, I don’t know. I’m driven to the idea that he was looking for action, but maybe not. I'm sure there are wrestling coaches in it truly for the wrestling, not because they like to see boys in jockstraps and loose shorts roll around to pin each other, while jockeying for better vantage points. I'd hate to get the wrestling industry on me by making false insinuations, so I know there's good guys, with some bad. And with the bad, varying levels of hanky panky going on. And I’m not saying on whose part. How's that, a padded room, a den of iniquity.

In general, I was never alone with the guidance counselor beyond ordinary school offices, hallway, gym, etc. Much to my relief, and I can’t speak for him, but he was generally in a bad mood and not looking for action from me. No matter what you may think of the guidance counselor, and perhaps it was my own sense of industry, I managed to survive that semester without losing my virginity to a coach, counselor, or non-student.
Posted by dbkundalini at 6:00 AM