Disembowel Him Once For Us 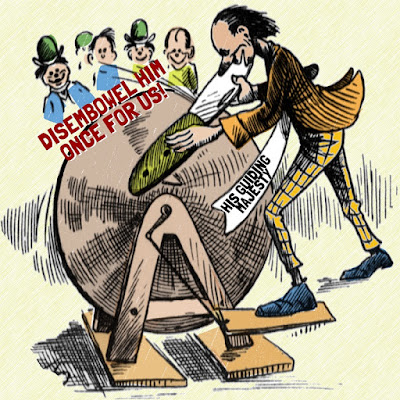 Real life happens without a chorus. You get choruses in plays, Greek plays. They’re a technique to show public opinion and the sentiments of the times and circumstances without having a guy stand there and tell you. More choruses would be great now, but we do have pundits on TV to explain every nuance of public affairs. And choruses might be unreliable, since they’d be giving us everything on their fool minds, not the salient points of an established playwright.

I wouldn’t mind being a member of the chorus, alternately booing whoever it is who’s the villain of the day or cheering the heroes. But doing it without booing and cheering, but by super targeted comments, encapsulating public sentiment and immediately convicting or encouraging those in the light. Like Twitter.

In school, I kept most of my affairs to myself. I don’t even think I told my mom of my travails with the guidance counselor. That would’ve been interesting, wish I would have planted a bug in her ear. She was the one who got me the wrestling deferment, and it’s only right she should’ve been the one to stand up to the guidance counselor and pull his evil fangs out of my back. Always making me feel badly about myself — or trying his devilish best to do so. She could’ve gone in there and rained hail-knots on his garbage scalp. As it was, he saw his chance to make me an example — to no one in particular except for his own satisfaction — and took it. My big regret.

One thing about it is clearly wrong, his delight at reducing me in his and my own estimation by my compliance, 1) by even going to his office; and 2) sitting there and taking it. Wow, looking back on it in hindsight, I had great options, but maybe greater consequences if they'd gone sour. I could've been instrumental in getting him removed as guidance counselor! That would’ve been awesome. But then I would’ve had to face the next loser they dragged in, and he or she (it would’ve been a he then) might’ve been worse. ‘So you’re the little punk who offs guidance counselor, huh? Well, off THIS!” he demands, and suddenly I’m deflowered.

Or I wouldn't have had to have the original guidance counselor barred; I could’ve petitioned for some relief from his scornful behavior. Which everyone would’ve understood and applauded if they were true to their values. It was these very souls — the few good and the many evil — who taught me about the American colonists petitioning the King of England for America. I can’t remember all their demands. I think they sought lemonade every other weekend and three square meals on Wednesdays.

How bad the crowd must’ve been in England and America. Because crowds are out for blood, mobs. Mob action, death! Hang him! Disembowel him! Even as the guy is whetting his most ferocious blade, a big machete, big enough to lop someone’s head off, or otherwise trim him, making him worthless for women or men of the same mind.

Well, anyway, here we are decades later. I still have all my bowels. However many you’re born with, they’re all still there. And exercised on a daily basis, as nature calls.
Posted by dbkundalini at 5:26 AM