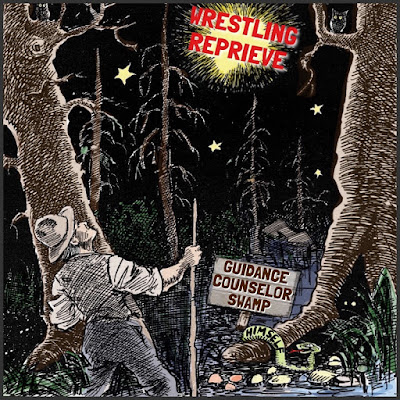 Anyway, the story of my sad decline from a normal student doing normal things to having to be with the guidance counselor weekly instead of wrestling started with a short series of seizures. Which, while I wouldn't wish them on anyone, actually were very interesting. Beyond Sunday School, they were my first taste that the surface life we take for granted is not all there is. There are experiences that go well beyond the norm -- brain or hormonal disturbances, if you could only tap into them.

Did I like the seizures? Absolutely not. But they were something of a turning point for me, and not all for good, then they went away. I haven’t had any since around 15 or 16 and quit taking the medicine when I was around 20. At times I’ve had the inkling that I could bring one on if I set my mind to it, but either I haven’t set my mind to it enough or it's a bad theory, because there haven’t been any.  Throw in great hallucinations and it'd still be interesting.

OK, the seizures happened. Then a while later there was a mandatory semester of wrestling for boys my age. I dreaded the thought of wrestling, then as it happened my mom wouldn't allow me to participate in it anyway because she was afraid it might induce more seizures. These days -- more modern times -- when a kid gets an exemption because of diet, allergies, other conditions, fear of crossing the road, it’s all highly respected. Their feelings — perhaps exceedingly delicate feelings — get tons of deference. Not then!

Back then, if you weren’t bleeding from a severed arm or leg, exemptions weren’t respected at all. You’re a slacker, you’ve put a lot of thought into it, in short, it was the same as draft dodging, which was always in the news. By the way, I signed up for the draft in a responsible way and checked the box that said I would not be a conscientious objector. Although, say I was drafted, I probably would've mentioned the seizures out of full disclosure and how I was kept out of wrestling, and it might’ve saved my life again.

But for me it wasn’t the anger of other servicemen or countrymen I had to face, but the plain unexplained disappointment of one stinking bastard guidance counselor. Why it was such a big deal to him is anyone's guess. But he made me feel very low for having the exemption, and extrapolated from that what the rest of my life would be, various handicaps, lack of values, penalties for willful shirking, etc. Did he point blank say all these things to my face? Many of the things he said I’ve forgotten, whether by actual forgetfulness since or a defense mechanism at the time.  The fact is, though, just to personalize it from his vantage point, he wanted to be the wrestling coach, and since I plainly avoided wrestling class, there was something deeper wrong with me.

That my friend is a swamp! I couldn’t have the good (a wrestling deferment), my shining star, without the bad, a swamp to slog through for a semester, with the presence of an unhelpful snake, the guidance counselor, clamped on my heels and driving me slowly at first, then more quickly as the poison coursed through my veins toward a personal and academic death, possibly.

What would be my escape from this swamp, this satanic serpent coiled around me and squeezing out my life force? In the movies, a hero comes to rescue Nervous Nell from the train bearing down on her tied-up body. For me there was 1) Suffer with it, 2) Hope the guidance counselor dies. Which he never did in those days, but he’s died since. So righteousness, even delayed eventually shows up when it's too late to do any good.

The real answer would've been to tell my mother and she would've made his life hell on earth. That's what I should've done.
Posted by dbkundalini at 4:51 AM