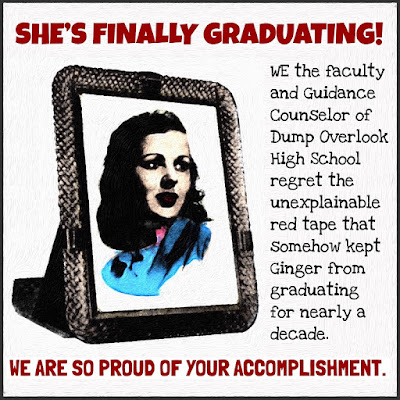 In my opinion, the school treated this young lady miserably, and I'll be more specific, guidance counselors and wrestling coaches over the years. The details of the case are so hideous they cannot be lightly aired here. But they must see the light of day. So I'll preface this rather juicy and immensely interesting story in a serious way. Do I wish it'd never happened? Yes. Can I wish it away? I've tried to no avail. At least I personally had nothing to do with it, so I'm off the hook. But of course I'm still fascinated that things could go so awry at an institution as well respected as Dump Overlook High School.

I hesitate to share the details because even this blog has standards. Foremost among my standards are two competing interests: 1) The life of the innocent must never be disparaged; 2) The guilty must never be cleared. OK, in Ginger’s case, I don't disparage her in any way. I supported her graduation as much as anyone after 10 years of high school. And as for the guilty, I oppose them to this day, forever refusing to exonerate them and their filthy ways.

Indeed, the sad truth is Ginger was kept in high school for nearly a decade. And why someone didn’t raise holy hell before now — not “now” but now contemporary then, 40+ years ago — is anyone’s guess. And since I’m anyone, fornication was at the heart of it. Just old fashioned you know what.

So it’s too terrible to even write about. I'm flinching at the keyboard. But the facts came out and still need to be rehashed, over and over, so these things never occur again. She was purposely lost in the system as various guidance counselors and wrestling coaches made a play for her. I know it’s not funny. I’m well aware of what we’re dealing with here -- liquid dynamite -- and those guidance counselors and wrestling coaches must be excoriated without mercy. Which they were but now they’ve all passed on. Which doesn’t excuse them.

This is so difficult for me. Because I know there’s someone who’s never heard the story and is just waiting for me to say something untoward so they can nail my hide to the shit-house door. Please don't. I'm not the enemy. These unnamed perps, who are all dead, were to blame. In no way was it Ginger’s fault, and I believe she’s also passed. Free of this terrible injustice, which lives in infamy.

One guidance counselor considered her file and lack of interest, and no matter how much pleading was made, how much sending of flowers -- and he tried various bait and switch schemes -- she was unyielding. He tried candy for a month, which was controversial at the time; it isn't that good for you.

As he considered the investment, which was mounting, naturally he was more and more loath to throw in the towel. But at a certain point giving up is the better part of valor. The other determinate fact that should've never been overlooked is she plainly wasn’t interested. And eight years of high school is enough for anyone.

So finally the guidance counselor decided the course for her future. After a cursory sham review of her "failing grades" they were switched to D, giving her enough credits to graduate five times. And to soothe any potential ruffled feathers with her or her confused parents (not right in the head), she graduated with distinction, the only student to ever get five diplomas. And their best wishes.

Why, O why, did they persist in such a scheme! he questioned himself.  Guidance counselors are optimistic by nature, but at some point you have to worry about your reputation. And collateral damage. Another decade and people would've been talking. So he needed her to cross the stage sometime short of needing a walker to get it accomplished. Pass her on, let guidance counselors in college have their chance.

G [initials were used in the reports] was a good sport about it, thankfully. She came into high school a sprightly flower, a delicate posy, so cute, so pert. And being voted most likely to succeed seven years in a row kept her spirits high. Which never sagged in all those years... But such an injustice!
Posted by dbkundalini at 6:41 AM