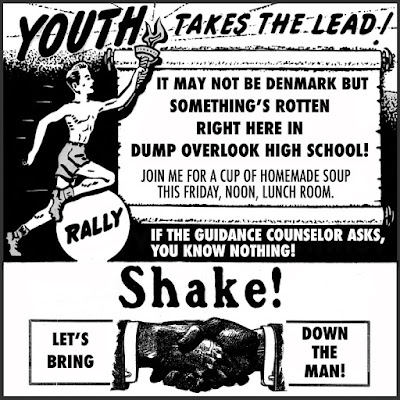 Here’s one I definitely remember. I had a hot plate thing, which is a one-burner stove you plug in. And I had the idea to print up a few fliers and hang them here and there to generate interest in my drive against the system, The Man, at Dump Overlook High School.

Yes, I was a wide eyed optimist in those days, somehow foolishly thinking that bringing light to a problem would very soon set things right. To make it short and sweet, I was concerned. I thought the guidance counselor was on some pretty shaky ground as far as his behavior.

In case you missed the basics, I was excused from the required semester of wrestling for boys because I’d recently had a series of seizures. My mom was concerned wrestling would induce more seizures. It wasn’t a universally liked idea on part of the administration. Especially, for more or less unknown reasons with the guidance counselor. He himself was a wanna-be wrestling coach, and maybe he merely wanted time off and not to sit with me. Whatever, we started out on the wrong side.

I thought it’d be good to call attention to this kind of injustice. It a time when protests were sometimes spontaneous, called by someone. But my cause didn’t rally many people. But it was spontaneous, the posters put up, the hot plate put into action, and the whole thing busted up by the lunch ladies and the principal in record time. Instead of resisting further and jeopardizing my freedom, I caved to his demands and put the soup away.

But it was a shining moment, with three other kids compelled to find out what the issue was. And definitely their consciousnesses were raised at least for a few moments, leaving them perplexed as to why they wanted to shut us down so summarily. But they were much like me, not compelled to go completely to the mat for an issue not clearly defined and with a lot of ambiguity.

The principal was nice about it, even though he probably shook his head about what kids would come up with next. I don’t think he respected us in the least. And the guidance counselor, of course he was interested, trying to get his hands on whatever dirt was being spread about him. My little sessions with him were a lot like that. He was less concerned what he could do for others, for me, and more what it meant for his reputation and day. A very suspicious guy, and who knows how much of that suspicion was the result of deeper things, truths that must not be spoken. If I knew them I’d tell you. But he kept a lot of his more deeply buried secrets — truths that couldn't be told — to himself. As to confessions, he had none. I believed he was guilty of something, yet never knowing precisely what. So just like that, we were shut down!

The soup was vegetable beef and the little bit we ate was pretty good.
Posted by dbkundalini at 5:13 AM