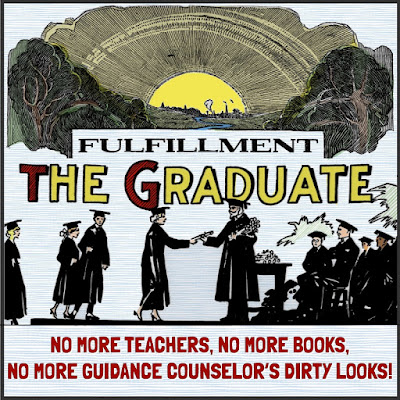 The big day for Graduation at long last arrived. No more teachers, no more books, no more guidance counselor’s dirty looks. Which turned out not to be literally true, because there he was on the stage and giving everyone the eye. Friendly or dirty, depending how he felt about you.

I was fairly proud not just of graduating but of everything leading up to it. When the big moment came, that which I’d stumbled my way toward for 12 long years (plus the time you sleep in Kindergarten) turned out decent enough. I somehow managed to pay for the flowing robe and hat and made it to the school on time. Pretty good, if I do say so myself, for an incompetent guidance counselee! Put that in your dirty look and smoke it!

The ceremony was supposed to be outside but was held inside because of rain. So even the weather was against me, because had it been outside, the guidance counselor would’ve been obscured by trees and shadows and maybe never brought to mind. Since it was in the school, we got the same glare of lights throughout, like at basketball games. Nowhere to hide.

Of course the scene was orderly and nice, with laughter for variances. Say someone did something out of line -- jump up and click their heels -- everyone laughed. The folding chairs had school color decor on each end, the junior orchestra was in good form belting out a few of the usual tunes. The faculty were in their places, apparently on their best behavior, not wanting to betray their true nature when so many unaware folks of the community were present. They wished it could've been outside more than the rest of us, so their biting comments and dirty sneers could've been more blatant.

The guidance counselor was on stage, like some kind of scholar. It kept running through my mind, “You almost graduated from Barber College and here you sit! Thanks to the GI Bill and the way your path was narrowed by fate! The simple fact that Barber College doesn’t have a wrestling team, and you thought you might be Coach of the team here! Then, if that’s not enough, the idea that they’d make a wanna-be wrestling coach, almost barber, the guidance counselor, how bizarre! Education isn't the orderly well-thought out profession they pretend. They grab any warm body. True guidance isn’t at work, except that of rank convenience for someone. A lowly staff person was no doubt responsible for this travesty. After making a decision of convenience, not merit, they got an extra hour to watch TV (some deadbeat guy) or have her hair done.

I saw him on stage. Every paradise has a snake in it, and this snake I had nailed. I zeroed in on him, watching for him to reveal himself. When in one moment of revelation -- when the principle had said something witty and the gym was joyous in laughter -- I caught a glimpse of him flitting his serpent’s tongue out quickly. He recovered before slithering off, maintaining his seat against further revelation. A bolt of lightning would've driven the revelation home.

It gave me a chill. But I put it out of mind. Then we were going through the alphabet, and when my letter came, near that time, our row stood and we made our way to the aisle, walking solemnly, stoically, toward either our salvation or doom. I passed the piano and prayed for strength that I wouldn’t crumple next to the principal and end up pointing to the guidance counselor, only to see him jump up like the assassin of my Spirit Animal Abraham Lincoln, and kill me before exiting the gym with a painful limp and later being hunted down like the filthy dog he was and burnt alive in one of the neighboring barns. A barn that would’ve been built for that exact fate, had it only happened.

Instead, what happened, our eyes met for a second but nothing consequential. I thought it over, “Oh, nothing, huh? Playing it safe for the rubes? Keeping up the responsible guidance counselor ruse." I got my diploma, turned the tassel from here to there and lived happily ever after. To that point.

It’s better to graduate than not. So I’m grateful I did rather than didn’t. Even when I go to graduation ceremonies now — I avoid them when possible — I wonder if a similar drama is playing out before me. I tend to ask around if anyone knows who the guidance counselor is, then watch him or her. But everyone seems real normal, nothing overtly hostile.
Posted by dbkundalini at 6:33 AM