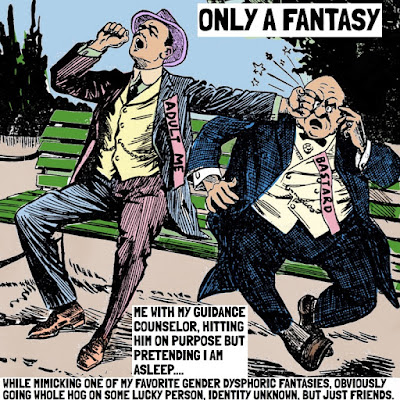 Of course in terms of actual history I never hit the guidance counselor. I sat there like a good boy. And we weren’t opposed to violence in those days. But I had some pragmatism, a self-interest to protect. And if he showed up today, I'd give him a friendly embrace. Even though he deserved a good whacking, a thrashing like he wouldn’t believe. But I had to worry about staying in school. Because to drop out would’ve meant a life of low paying jobs. Instead of the wealth I'm surrounded with now. Just bought a microwave three weeks ago.

But those days are gone, and we’re geared for fantasies, you know I’m right. I bet most of you have serious fantasies. I’m not going to sketch out any of mine, except to state what’s obvious in everyone’s experience: I’m the center of it and it involves lots of different characters all with very perverse intentions and playful schemes of behavior. Which is enough about that.

Most of my fantasies do not — let me repeat, do not — involve guidance counselors. But now that I’m old, maybe I missed out on something. It really took a lot of thinking in these latter days of my life, leading to this blog series, for me to flesh out what are likely the patterns of guidance counselors. Most of you probably had good guidance counselors, at least seemingly good. They were good enough not to jump your bones on the first session, and if you only had one session with them, you got off scot-free.

To be fair to my guidance counselor — a guy I did not like and would have no reason to say good things about if they weren’t true — he never once jumped my bones or attempted to. He was passive/aggressive, yes, but only in ways either to help me or injure me psychically, not sexually. I would never accuse anyone falsely of such a thing. As it turns out, with adults (and me as a kid) there was never ever the slightest untoward thing that anyone did to me. Which these days is no laughing matter, of course.

I didn't care for his words and attitude, though, and his behavior was not exemplary in the fullest psychological sense. But there was lots of room for deniability for him. Which my Mom could've discerned and figured it out. She got me in with the guidance counselor in the first place, so I wouldn’t have to take part in a semester of wrestling. But even she did not know the problem.

It does me some devious mental good to take him on in memory. It's funny. Like this sitting on a bench and faking a yawn and, oops, a black eye. And, yes, I know gratuitous violence is also out today -- we're so righteous -- but this is purposeful violence, indicating my desire to strike back, to smite righteously a hostile adult figure. Which is still allowed. "Oh, did my fist accidentally smite your eye?"
Posted by dbkundalini at 6:33 AM