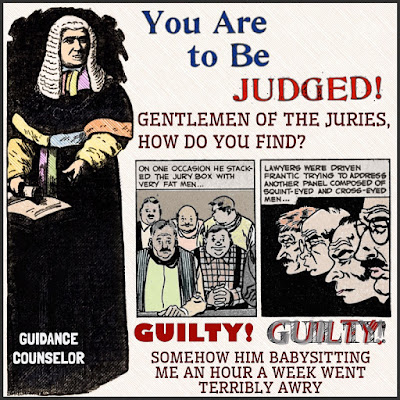 Are you up for Judgment Day? Morality and mortality. It's handier to keep your morality right in front of your pointy little nose than not. So I do, a persistent state of consciousness coupling it with a feeling of imminent mortality. Goodness is its own reward. Birds and fish probably feel the same thing as they're driven by the sun or tides, inexorable and feels just right.

My usual consciousness, like the average guy, is life goes along as normal. With ups and downs, yes, but consciousness always hitting the target in the same ways and places. Making life predictable, and except for extremes — the ever present danger of serial killers and being wiped out on the freeway — it keeps its predictability. On the serial killer front, though, we can all be buoyed by the great work they’re doing with DNA. Wait several decades and they'll be nailed as toddlers, thanks to ever better science and robo guidance counselors.

Before then I will have faced my Judgment Day, and that'll be a piece of cake, really, thanks to certain Sunday School doctrines I’m pinning my hopes on. It'd be all the same, really, if none of it panned out and instead there’s fountains of living water, and beauties by the score according to your innate preferences, magical bliss for eternity. With no sign of guidance counselors.

Say Amen if you agree, no Paradise should ever be crawling with evil sin-inducing serpents or these other scurvy dudes. We could start a movement, our own religion. A lot of people don’t believe in the literal devil, and that’s understandable. Evil is a matter of choices and every coin has a flip side, etc., which I don’t want to get into. But other people have had at least a brief run in with a guidance counselor, so their theology on ultimate things runs deeper.

The key thing I remember about mine is the sense of stern judgment he held against me. For things that weren’t really my fault, having had a series of seizures and so getting a deferment from taking the semester of boy’s wrestling. It’d be great to go back and find the statistics, how many kids caught the same break. It couldn't have been many, because week after week it was just me alone with him. No one else. It would’ve been nice to have at least one other kid to dull the blow of his disappointment. Because he saw implications for my distant future that were dire, and a lot of it has come true. Every pain I get — and I got mad one day a few years ago and kicked something heavy and my toe still tingles — might’ve been the future he foresaw.

As a Judge, had the personality for it. It might've come from his time in the service where they have exacting standards and allow little deviance from the requirements. The politically correct side of me says to honor his service, but the practical side of me hints that he might’ve had a happier disposition if he’d just dodged the draft and left the fighting to other less fortunate souls. Be all that as it may, fate brought us together. He had one battlefield, the front, then chose another battlefield, my life, messing up my one fortunate break...

Looking back, though, and I oftentimes have, it could’ve been fun wrestling boys. I obviously can’t go back now. But I probably would’ve lived through it. Now I could almost do it, be flipped by classmates, pinned, depantsed, whatever it takes, with pictures of me later showing up in the bathroom. And everyone's rumor, “The wilting flower act is just an act, the little perv has a hidden agenda...” No, that'd be horrible.

But as the guidance counselor and his staff of bewigged judges would no doubt rule: “Guilty! Guilty! Guilty! Condemned to be hanged by the neck until he’s dead, and leave him there just in case.”

Posted by dbkundalini at 6:36 AM