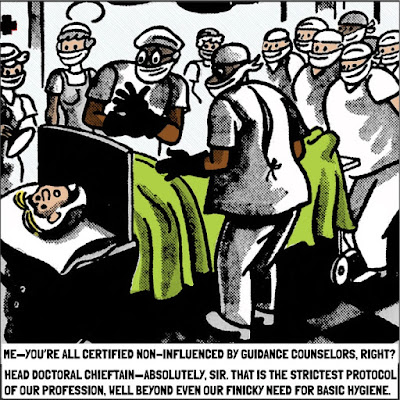 The graphic is from recent years, when as an old man I started having colonoscopies. Now I'm an evangelist for colonoscopies, recommending them to everyone for the good they can do. It involves going in the anus with some kind of camera tube and it extends up into you and sees if there’s polyps in there. If there are they can be cancerous. Whether they are or not they usually take them out, depending on various factors that I don’t need to go into. The beauty of the whole thing from the patient’s point of view is they put you to sleep and a second later you’re in recovery.

Do I mind having them? Not really. Of course I’d rather I'd never need anything of the medical type. But eventually there we are. If you get older, things will go wrong with age, and if you want your life to progress with less complications, a little prevention or intervention is necessary. Colonoscopies are one of the procedures that are very helpful toward having positive outcomes. Get together with your doctor and see if you could benefit from one.

Now, naturally, when you’re on the table, you’re not there to quibble with the doctors about their views on things. For instance, I don’t ask them which news channels they watch. Because I’m trusting that no matter how crazy their viewpoints might be, they know their colonoscopy stuff. And I don’t seriously ask them whether they’ve been influenced at any point in the past by guidance counselors. (Yes, it always crosses my mind.) One, what can you do about it? Your past is your past. And again, they can do great colonoscopies no matter their interactions with guidance counselors.

I'm definitely suspicious of anyone who’s had interactions with guidance counselors and have liked them. Because my guidance counselor was a no-good so and so. But that doesn’t mean I’m personally a bad person. Just as it wouldn’t mean my doctors were no-good if they had these relationships. Anyway, a guidance counselor's influence may be fleeting, and the consensus almost has to be that there are guidance counselors who are good people. I’m optimistic enough to believe that, but never forget, they're more likely out to get you in a negative way.

A person could ask their physician just as quickly if they were ever influenced by wrestling coaches. Which is equally questionable as far as I’m concerned. Am I saying there’s no good wrestling coaches? Again, for legal reasons, I can’t go that far. Not every wrestling coach is a varmint. It’s hard to type that, but my lawyer said it should be there. And anything I write that seems to suggest anything to the contrary deals with individuals not cited by name and not representative of the profession as a whole (wink wink).

Which could be the actual truth, hard as it is to believe. Because think of the statistics. They say there’s good in everyone — we’ve all heard that — so despite the individuals we’ve known and loathed over the years, they do not necessarily taint entire classes of people. I know that objectively and affirm that as the truth.

I should probably also put a disclaimer about colonoscopies. I personally think they’re good, with a doctor’s recommendation, for their purpose, diagnosing problems or giving the all clear. But they may not be for everyone and I’m not claiming they are.

Why I feel I need to scrupulously hedge my legal bets here is anyone’s guess. But I do. And let me add, Nothing in this blog should be used to judge, diagnose, or derive actual useful information. It is for entertainment purposes only, and by reading it, you hold the writer absolutely harmless from all legal ramifications and/or claims. If you're not entertained, you read a long way trying to be, and I affirm that.

Anything else that you read here that might be offensive — like almost everything else I write — is strictly my personal opinion and not anyone else’s, except my loyal readers', who dwell somewhere in the known world and do not wish to be identified as such.
Posted by dbkundalini at 6:17 AM