Spit In My Spaceage Locker XL5000 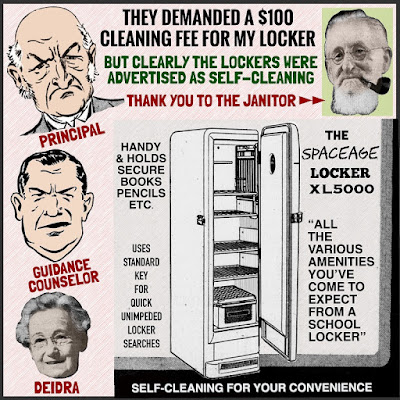 Here’s one for the books, my filthy locker that needed cleaned before I could graduate. And the guidance counselor took the same position as the school administration, that it was my responsibility either to clean it or pay $100, a lot of money.

This one needs a tiny bit of explanation. I was assigned the locker at the beginning of first year (of three years in our town). It was literally next door to where the wrestling team met and far from where I normally hung out. I immediately quit using it when I met a girl who let me share her locker. Her locker mate had dropped out. Then a guy I knew from Sunday School who was my original locker mate dropped out too. So our locker was abandoned.

Somehow, then, the locker abandoned by me "popped open." And unknown wrestlers and others, experimenting with chewing tobacco and other scummy pursuits, spat in it over and over. If they wanted good luck, they spat in the locker. If they had a tough opponent coming up, they spat in the locker. Over the years I periodically went by it and noticed it was open and I’d push it shut, but since the lights were bad down that hallway I didn’t notice the mess.

So the time for graduation came and I was tagged for having a dirty locker! It took a while to realize they were dinging me for the original locker, unused by me for three years. But when I went to look at it -- damn right, it was dripping with spit, with plenty more, years worth, encrusted everywhere. And not just that but dust balls that float randomly through the air. Everything you’d expect a sewer to be if sewers came in locker form. And now they expected me to pay $100 to clean it up...

Well, guess what, I said a little prayer, “Help me out of this mess. Some a-holes spat in my locker! Amen.” The very next thing, one of the janitors that I was halfway friends with came down the hall. He didn’t know the spit locker was mine but was sympathetic when I told him. Sympathetic to the point of taking me to his closet and sharing some of the original literature that came with the lockers.

You see a piece of it in the graphic. That brand of lockers was advertised as self-cleaning! Meaning, cleaning it should not my problem. And if the self-cleaning mechanism was broken, it was the school’s responsibility to fix it. The fact that the lockers were put in in the early ‘50s had nothing to do with it.

I explained the problem to a friend in the debate club, and he presented my case to the school board, who had to agree, the defendant didn’t owe a cent. The school was at fault!

So where does this leave the guidance counselor? Thanks, bud, for stabbing me in the back once again. After the great times we spent together, you doubted me one last time. But a big thanks to the janitor and his wife Deidra, who also had me over for donuts. She commiserated with me, saying how sorry she was that some bad boys spat in my locker. I patted her hand and told her truly, “That means a lot to me.”
Posted by dbkundalini at 6:22 AM