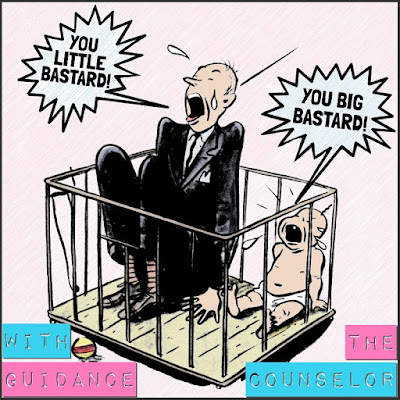 Through this hardhitting guidance counselor series, I have rightly portrayed myself as the aggrieved party. With the guidance counselor being the supposedly responsible adult with an actual profession of “guidance” and “counseling” to uphold and perform. Far from what I was, an innocent high school kid, not an adult, with the innocent psyche of a half-formed, mentally bereft person, barely there at all.

It's so hard to picture me as immature, but I was. Because look at me today. People look at me, they point to me, maybe they read my blog and say, “There’s no one more mature, more responsible or qualified to lead the youth of tomorrow.” And it’s so true. I always take the position most aligned with good behavior, benefits for all, and responsibility. It’s not for nothing that my blog was voted “Best Blog to Fall Asleep To” three years in a row by the juvenile delinquents in my neighborhood. It was also a true survey, the results not determined, like most, by payoffs.

But I seriously wasn’t precisely an infant in a playpen in high school, but virtually. I didn’t know anything about anything. If you would’ve told me that babies came from baby factories and parents picked them up, I would’ve believed it. The closest thing to sex I knew was dirty magazines, which in those days weren’t explicit. More cartoons than anything, all hinting around about something but never quite coming out and showing it. Not like we have today, a fully inflamed wanton moisturized ready-to-go double-page spread and engraved invitation unmistakable in begging eyes.

So when I showed up at the guidance counselor’s office, I wasn't ready to be under his thumb and wasn't prepared to take him on. I appreciate it today that kids are schooled a lot more in what adults can do to them and the signs they need to watch for and the responsible things to do as a response. Back then they simply trusted adults and suspected kids of being dummies, which I at least was.

So we might wonder how did wrestling coaches get away with so much? And how did guidance counselors manage to break their students psychologically? With so few consequences. There was an stupid innocence and lack of awareness then that adults are up to no good if given half a chance. So these guys could commit murder and it'd be your fault...

It makes my blood boil, at least simmer, to see an adult guidance counselor in the same playpen as an innocent baby (representing me) wailing like he’s somehow the aggrieved party. I’d like to grab that lousy stinking bastard by the scruff of the neck, or let’s say cinch his tie up a little tighter for him. Then with his head straining like a filthy pimple, engage him toward expanding his professional disciplinary horizons. "You bastard" is right! How dare you?!
Posted by dbkundalini at 8:05 AM