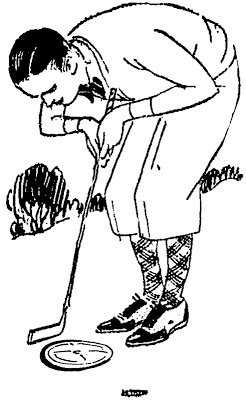 I was at the church picnic on Sunday. So far, so good.

You figure you're out with the redeemed, everything's going to be paradisaical. So why did it turn out to be such an embarrassing disaster for me? I'm a nice guy. My sense of justice is crazy overboard, that's how just I am. I just don't believe in false weights and balances.

Lunch was fine, good potluck that didn't quit. Then it was time, after I got invited, for some of us guys to play Frisbee golf. The park's set up for it, with big goals scattered here and there, at the end of the various greens. My big problem was I didn't have a Frisbee, and there weren't any extras. Except, and this is only my suspicion, surely one of the guys had an extra in his trunk. He's got five kids. But how to prove it ... I can't.

Naturally, I tried to beg off. You farks have never noticed me before. Why do you want me to join you? Unless I'm their mission project -- which I hadn't heard of -- or they know I'm going to be at such a disadvantage, they can humiliate me and thereby feel better about themselves?

One guy suggested I use my cap, which sounded unreasonable, but he talked me into it. It has a bill you can hold, and if you give it a good toss, he said, anything could happen. On the other hand, I reasoned, it doesn't have the same sleekness of a Frisbee, or any of the other apparent qualities that might make it particularly efficacious as a flying thing. You can flip it up on the hat rack, beyond that it's best left on the table. Just looking at it, in terms of taking the place of a Frisbee, you see it's got a big hole where the head goes. Wouldn't it seem like the air's going to get up there and play havoc with it when airborne?

The same guy started making chicken noises, which of course was all it took for me to join the game. I'm actually up for anything, within reason, but looking back, I should've gone for something else and just ignored the chicken taunt. I would've done better with a rock, a big stick, a can filled with dirt. Of those three things, a rock would've been best, since it has weight and you can throw it straight with a big heft. But I went with his suggestion and just used my cap.

Right away I was behind. The other four guys took their turns. Some were deadly accurate, another average, and one wasn't good at all, the same guy who suggested I use my cap. Even he showed me up. My hat sailed along pretty good, as far as it could go. It just didn't have the same drive, no matter the force with which I flung it.

Two of the guys got their first goal in no time. The average guy took a little longer. The one who wasn't good at all made it a few tries after him. Then there was me, without exaggeration taking 10 shots for every one shot of the better guys. And it wasn't that I was veering off too much. For the most part, I was throwing it straight. But the floppiness, the lack of a sharp edge, the head hole, the weight, all these factors hampered me.

Due to some of these factors, by the time we got done with the first goal, I was 11 points behind. And there were still eight holes to go! The second hole was as bad or worse, because it was uphill. The first two guys were terrific, as before. The average guy kept his place. And the poor guy was just as bad, throwing it with next to no sense. Just couldn't get the hang of it. So how embarrassing for me to have to concede, he was still better than me, by far. The wind was coming down the hill, that very direction, making my hat catch it and sink. I was something like 30 shots behind. The weird thing was how the poorest player reveled in my misery.

OK, it was time for the third hole. This was not uphill or downhill, but across. The wind being unpredictable, some of my tosses were totally off. The game had proceeded apace, the great being great, the average guy being average, and the poor guy poor. Then me. Now, I'm not one to complain that much about my place in life, but I'm usually the average guy. It screwed up my sense of self as well as my confidence to be coming in last. And yet, because these are guys from my church, I couldn't cuss a blue streak, which likely would've helped. I didn't want to damage my carefully cultivated holier-than-thou image. The poor guy was really bugging me, though. The good guys acted nonchalant about it, probably hoping I'd quit so they wouldn't be wasting so much time.

That's the "voice" (which I imagined) that I went with. "Guys, I'm better than this, I really am. I just can't get any lift from my cap. I don't know what's wrong with it. Probably needs a new bill, or maybe the material in the headpiece is just too flimsy. I've had it for a long time, and I think it's lost its form. It's been stretched, it's well used." Indeed it is well used, my doctor having recommended a cap to help prevent skin cancer.

The guys who were great were cool with me dropping out, the average guy semi-cool, and the poor guy was royally pissed. "Come on, it's better not to start a game than to drop out in the middle. Didn't the Lord say, 'He who looks back is not fit for the kingdom of God?'" "Yeah," I said, wanting to tear into him worse, "But Bible scholars are divided on that verse having anything to do with Frisbee golf." He was cussing under his breath. With me dropping out, that meant he was in last place. His only hope to make any kind of respectable showing was for me to play with my hat.

You know what? He's the guy I suspect having an extra Frisbee.
Posted by dbkundalini at 10:53 AM