Squatchs Is The Craziest People 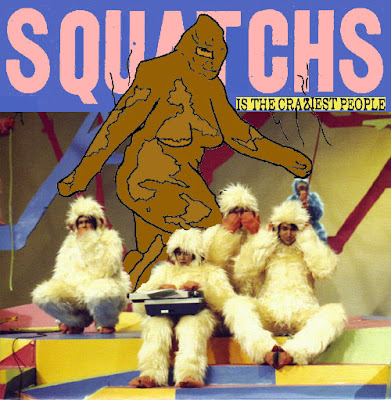 I've seen a couple episodes -- bits and pieces -- of the TV shows about people looking for Sasquatch, Bigfoot. First, my opinion of TV drops by the day, with every moron (except me) having his own show. Don't you think I could have a show? We have cake shows, gator shows, turtle shows, hog-fishing shows, children with their own shows, redneck shows, Bigfoot shows ... there has to be room for one more. Me just staring at the camera till I get a cute idea. Who blinks first, me or the viewers? Sounds similarly smart...

It seems that finding Sasquatch -- or Squatch, as he's familiarly known -- is one dead end after another. There's one grainy 28 seconds film of him from 1966. The rest is commentary. Yes, they try to be proactive. They take their night viewers out in the forest and look for him. You can probably guess what happens next? Just missed him.

I was thinking what it'd be like to be the secretary of the Sasquatch Seekers Society. You'd go into it thinking, "Wow, I'm on the front lines of history. We're gonna find Bigfoot and be famous. How hard can it be? With satellite technology, heat-seeking gadgets, video cameras that can be placed in every tree, various entrapment devices along the way, high-powered weapons, and trained seekers, it doesn't seem like Bigfoot could remain elusive for long. Especially since he's a beast that doesn't actually know we're looking for him. And even if he has an inkling about it, he certainly doesn't share our technology and resolve. Piece of cake!"

Then the meeting starts. You're poised with your pen, only to take notes on a rehash on the '66 film, that indeed Sasquatch walked up a particular hill, looked back at the camera, then disappeared behind some brush. Let's review the film one more time, just to be sure. Yep, that's him walking up a particular hill. Yep, he's now looking back at the camera. And, by golly, there he goes, disappearing again behind some brush. Let's put the film away till next week. When we see it with fresh eyes, maybe we'll see something new.

Of course there's going to be skeptics, always the worst scourge for the true believer. Whom we want to convert as soon as possible. Here's the evidence, all gathered in this thin manilla folder, sketched out in as much detail as we could muster, on this handy 3" x 5" card. Hey, you say it doesn't look like much? It's enough to base an entire show on. Because the viewer never knows, this might be the week we get out there and something happens.

Really, I think that's what you need to do. Actually prowling around the forest, the green light showing your startled faces at every cricket is very dramatic. Don't they sell calls in the back of hunting magazines you can get to simulate the bleats of wounded animals? Various urine scents? That'd be cool. "Bleat, bleat... Pee, pee." And, yes, here comes a hungry Squatch, just broke the animal call, drank the pee, and stole the 3" x 5" card!

We could have a whole episode focusing in on our courage for having spent the night out there. Even if there's no such thing as Squatch, meaning the danger from him was minimal, still, a snake might bite you. Which I'd hate. Or mosquitoes. Probably worse. With snakes, you can see them reasonably well. But mosquitoes are so small and devious, it's tough to get a bead on them.

OK, so I'm the secretary, as described above. I need to summarize the many reports that are coming in from all over the forest. There's lots of noises, very eerie out here. What's that?! I'm checking it out. I heard a noise down there. OK, it was a family of grubs building a nest. Ouch, a family of grubs?! LOL. But let's get closer to the stream. Squatchs have to drink, right? Stands to reason. What's that?! I hear some rustling around over by that little dam. Which -- I'm getting closer, ever closer -- appears to be ... yes, it is ... a family of beavers sharpening their teeth on a sapling. Damn! A family of beavers and a family of grubs, all in one night?

Must-continue-believing! That in spite of scientists having had no trouble already finding most of the thousands of species of life on earth, this elusive creature is still out there, unseen, except for that day in '66. It seems to me -- and really, I'm nothing -- that if there's one, there has to be more. Like his mom, his dad, then their siblings, then the whole clan, the whole pack, going back many generations. Then home sites, places where they've gone to the bathroom, places where the females are busy nursing babies, etc., etc. Did one Squatch simply fall from space and is waiting for the ship to get back?

He finally leaves the society, after dutifully filing the minutes book on the shelf, very disillusioned. He steps outside and is mauled and eaten by something, either a Squatch or some other UCT (Unidentified Creeping Thing), big as a house, which then walks up a hill, turns to look back, and disappears in the brush.
Posted by dbkundalini at 12:58 PM