What Is It with Sexual Diseases? 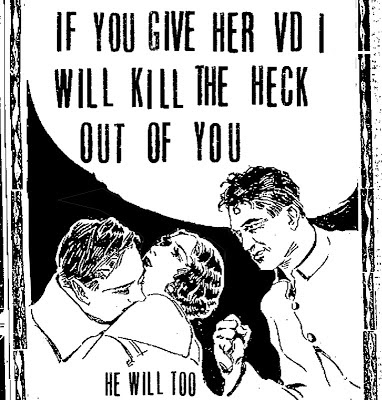 Which one of us, in his position, would do any less? If I could be there on the scene, let's say, and I had a personal stake in the issue, or maybe even if I didn't, and had certain knowledge that something permanent and awful was about to happen ... well, I won't incriminate myself as to what I might do. But it'd probably be deadly, approaching a 99.9% certainty.

Look, why should this cad's momentary pleasure -- sick and twisted as it is -- take away this poor girl's health forever? That's quite a tradeoff! One I would definitely try to prevent, if I could. "Come on, honey, he ain't worth it. I've seen what he's got, and I've seen what it's got! It's crawling with it! And you don't want it!" Far from it, if you know what I mean.

I know sexually transmitted diseases are terrible. That I've heard all my life, since I was barely able to even fathom what was going on. And the key thing, that which makes them so bad, is the permanence factor. You  never hear of STDs that are anything but permanent. One you have them, that's it. You're 15 and get on, you're still dealing with it when you're 95. Eighty years of whatever: bleeding, itching, breaking out, terrible rashes, runny spots, etc. ... I don't want to get too graphic, not this early in the post.

The first one I ever heard of -- probably in 5th grade -- was venereal disease. (I should say, I'm not a doctor. I am not offering reliable medical information here. I certainly am not able to diagnose any disease. And I'm not going to try ... keep that nasty thing far away from me.) Venereal disease, aka VD, was related to me as something down there, that was caught by contact with someone with it. I still believe that is true. It was something soldiers and sailors came home with.

And the worst thing, once again, is the permanence. At that time, and I haven't heard anything different, it was incurable. You might have times of lesser pain and agony, but the same old pain and agony would be back soon enough. You would have trouble going to the bathroom. The problems simply multiplied upon themselves. It's not very funny to read about, I realize, nor is it any great pleasure of mine to write it.

Since those early days, I'm come to understand there are plenty of other STDs. And whether they're related to VD, that I can't say. I've done myself the favor of remaining wonderfully ignorant on the subject. All I know is I would avoid all contact with anyone until they were proven to be healthy. Among the other STDs I've heard of are chlamydia, gonorrhea, AIDs, and I think there's a handful of others, which I can't think of now. Yeast infections??

Once again ... we get back to the permanence of these sons of bitches. They can cure virtually everything else, from dandruff to cancer. (Seriously, even cancer can be put on the run, thanks to radiation, chemo, and occasionally a prayer from a well-paid televangelist.) You can cure (or outlast) measles, mumps, chicken pox, and even the shingles. You can endure and/or treat arthritis, pneumonia, halitosis, catarrh, rheumatism, piles, the dropsy, water on the knee, toe fungus, ankle pain, hemorrhoids, dog breath, Italian breath, rickets, polyunsaturated fats, fatty limpids, cuts on your elbow, chigger bites, poison ivy, toothache, hearing loss, blindness, olfactory hallucinations, game toes, quicksand, kryponite, bee stings, ingrown toenails, driver's ed, fish ich, ptomaine, the heartbreak of psoriasis, funny-bone slams, and loneliness. All that and more. But not STDs.

That's just too weird, and if you've got one, I'm sorry. The idea that this one thing besets us -- and all because we wanted to have a good time and possibly breed. It's only natural. But, no, we're simply stuck, forever stymied, forever frustrated, with no way out ... but to become monks and nuns and live out our days shut in, taking cold showers and bundling ourselves up in diapers with Super Glue adhesive. I'm at a loss. Mankind has been defeated, despite our best science.

Is there any way around it?
Posted by dbkundalini at 2:38 PM