My Next Life in the 28th Century 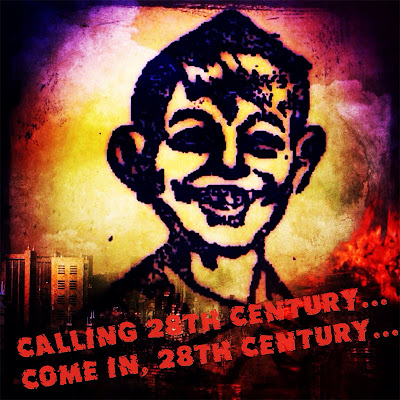 I'm becoming an old man in the current century. I'm literally 60. And now I'm getting dizzy if I lay on my right side. That's no good. Obviously, I can't go on much longer. 20 years goes by too fast, and next thing you know I'll be 80, with even more problems. I'll probably be dizzy all the time. So I have to make plans for what's next, what's to become of me.

My idea, which I think is pretty good, has been to make careful arrangements to be cloned in the future. I'm looking toward a distant time -- the 28th century -- figuring that by then cloning will be old hat. Plus, you know, it just sounds good. The 28th century, a nice round number. And distant enough that I can look forward to a fresh start, but not so distant that I'll be dead forever. It might be like the first time I was born: Billions of years passed and I didn't even notice it. What's 700 years?

I'm also optimistic about the 28th century for another reason, that I've always had great faith in the younger generation. These are people who won't even be born for another 600-700 years. Realistically, you can't get much younger than that.

To accomplish this, of course I can't just die like everyone else, forgotten. Before that, I need to preserve my DNA, and let the folks of the 28th century know about me. I'm still working on the DNA, although I have already preserved some samples around my place. And as long as I hold out, I'll be working on it.

The 28th century people will know about me because they will be able to refer to this blog. I'm sure, with Google's efficiency and the government's careful preservation of everyone's records, that the content of this blog will outlive me, in my present incarnation, by many centuries. I have given my exact town and address numerous times in previous posts. Also, I have a prepaid full page ad with all the details in the Daily News to be published on January 1, 2750, right in the middle of the century. That seems fail-safe.


"Please clone me so I can come back. I have a great appreciation for 28th century culture, which I believe will be greatly enhanced by my actually experiencing it in person. So far, unfortunately, I have nothing but guesses about what it will be. Still, that's a lot more than those around me, my ignorant 21st century peers."

Like I said, there are DNA samples on my half acre. I have buried samples of phlegm, dandruff, blood, saliva, etc., with the containers clearly marked and wrapped in grocery store bags, which I'm given to believe will never decompose. I'm also keeping samples at the post office, Box 734. (There are also samples of a more personal sort, which I had quite a time producing. I'm reluctant to mention this, only because I don't want ladies desperate for children trespassing on my property looking for the ideal donor.)

If anyone can think of other ideas -- better ways to get the word to the 28th century -- which I seriously doubt, please leave a comment. But let me just say up front, I've already thought of groundhog holes; I just don't see how to make it work.

OK, what's in this for the 28th century? I think it's win/win, as I'm already a time traveler, one who has already straddled two centuries, the 20th and 21st. I have proved my adaptability in different settings. When I was a kid we had a home phone. Now we carry our phones with us. I can tell them about our great progress. Like how we used to use the same phone in our homes all our lives. But now we need a new one every two years. Plus, I'll be able to tell 28th century archaeologists all about our times, how everyone got along so well, except for minor exceptions, like our unfortunate world wars.

What I'm hoping for in the 28th century is the simple life. I figure by then, with the apocalyptic chaos still to come in our time, that life will be generally agrarian, folks keeping it simple, being one with nature, going fishing and whistling. I'm expecting there will be lots of time for reading, pleasant conversation, and congenial village life. Like the Andy Griffith Show, without the conflict.

I'm also hoping, and call me visionary, that when I'm in the 28th century, that I'll be burying my DNA once again, placing a prepaid ad in the newspaper, a sample at the post office, etc., with a message to the people of the 35th or 36th centuries, to clone me again. I'll leave it up to the folks of those centuries to decide which one they think will be best for someone of my tastes and abilities. If the 35th wants me, fine. Or the 36th might tell them, no, they'll take me.
Posted by dbkundalini at 10:25 AM