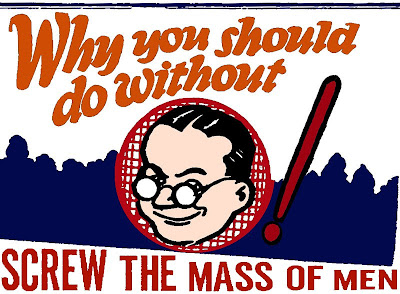 I heard an interesting quote, that I think really applies here: "The mass of men lead lives of quiet desperation." Whoa! Let that sink in! That's "the mass of men," Joe Average, Walt Wimp. So applicable, definitely, to the situation here at hand! Whoever first said that surely had in mind the Wimps of our present day. How prescient!

It's in that awareness, and that spirit, that I announce an executive decision, made without consulting anyone, asking no counsel but my own inner authority: I have cut off and immediately terminated your opportunity to sign up for a Daily subscription plan. That option is hereby gone. You're out. We've already moved past it. You've been judged unworthy. Your inaction doomed you, as I figured all along it would.

Does this mean the paywall for my blog is dead? No, how would you come to such an absurd conclusion? Did you do it on your own? What a leap! It certainly does not mean that. But it does mean that for those who might still avail themselves of one of the higher subscription plans, your time also is running out. Do not delay. The cutoff point could come at any time. Act now or possibly be left high and dry. Don't presume, the time remaining is short. Act now, with all haste. Due diligence must be your watchword.

With the Daily option gone, that leaves plenty of options: Weekly, Monthly, Yearly, and Lifetime. If finances are an issue, then by all means I'd say go with the Weekly plan. At $700 a week, it's your most economical rate, but it might not last. Lock it in now. The other plans remain more secure, Monthly ($2,800), Yearly ($33,599), and Lifetime ($5 million.) You can have a fair to excellent hope of those being available.

But who knows? Sometimes life's opportunities are fleeting. All the things we have to go through to exist ... most of it has nothing to do without our own conscious choices. But there are a few things, some of the things of happiness that the moment makes demands on us. My part in that is to experience it along with everyone else. But once in a while, as here, I have something to do with it. And I don't mind teaching a few dawdlers a lesson or two about life! Ever hear the old saw, Time waits for no man... ? Well, things happen.

So that gate is shut, that door is locked. May the money you might have used for the Daily option canker and rot. I wouldn't accept it now were you to throw it at my feet. The reason why -- and this is obviously a serious matter -- is Wimps are not worthy. There was a very good reason, as it turns out, why you were so labeled. Your failure to seize the moment was signal. Opportunity knocked, but you failed to answer. Forgoing your role in the equation was a crucial decision, and lamentable...

For me, the term Wimp always calls to mind a dreadful condition of spinelessness, and in this case the allusion is deadly accurate. It's weird that you share life with me. It just makes you realize, we're all that close. We breathe the same air, we see the same sky. Day is day for each of us. But there's huge differences in how people seem to function.

Maybe it's not entirely your fault, although I'm not looking to prop you up with excuses. Newborns sometimes lack just the right oxygen mix, then years later pay for that in failing health. However true that might be, I'm convinced most of our problems are our fault. How much oxygen would you have needed to do the right thing in this instance?

So, yes, the paywall's still going up. That won't be stopped. But something has been stopped, something has been terminated. The Daily subscription option. If you have only $100 to spend, keep it -- we'll do without your meager contribution.  The clarion call that you somehow missed has now gone silent, what was warm is now cold, and your chances are through. What a terrible thing it must be -- I'm trying to imagine it --  to realize how close you were, how your opportunity was right there at hand, and you were unwilling.
Posted by dbkundalini at 10:15 AM