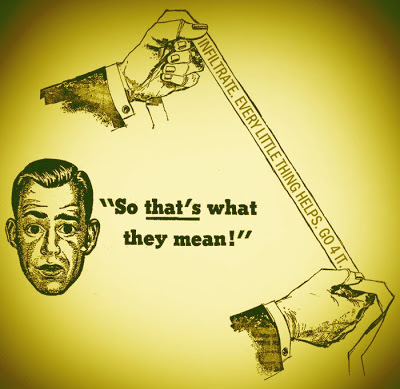 I carefully studied my instructions under a streetlight.
The lighting made it look very weird, kind of a greenish yellow.
I was struck. The color's so weird.

But there it was, in the bad light. A mysterious ticker tape printer in a culvert, right where the voice on the phone told me it'd be. Low, husky, likely a man, maybe a big woman. I'd been recruited into an elite cadre of government spies. Which is very cool for me in particular, having been as a child not just a member of the Spy Club, but its baton twirler.

I wasn't a bit afraid. Even though usually when I get weird calls, anonymous, unannounced calls, I'm paranoid as hell. It looks like I'm getting hardened to it. I've gotten worse calls. It used to always be some unknown guy saying, "I know where you go ... and I know what you do there ..." I always hated that. Because, honestly, I never went there, and, besides, I don't remember doing anything that was so bad.

This new voice, even though it was a big woman trying to sound like a man, wasn't threatening at all. I heard something of benevolence in it. Saying between the lines that I was trusted with a task, which, if I'm not mistaken, is something the government is putting forth to every citizen they trust. And, yes, the government can trust me. I hereby raise my right hand and solemnly swear that I will protect this nation from all enemies, foreign and domestic. Looks like domestic, since it's local here.

You see my instructions. There's no particular task. Just "INFILTRATE," with the unspecific, but assuring, "EVERY LITTLE THING HELPS." And I like the pleasant nod to modern linguistic conventions, showing that we're not taking ourselves too seriously here, no doubt meant to put me and my fellow trusted citizens completely at our ease, "GO 4 IT."

This is the kind of task I like. I can set my own goals. And I obviously have plausible deniability if I'm nabbed by a saboteur, "I know nothing. I'm digging in your garbage for recycling."

All right, I got this message a week ago tonight, and I got right on the job. Since "EVERY LITTLE THING HELPS," that's what I started with. It gave me a great excuse to go to the river. But not just anyplace. I wanted to go to the backwoods. There's a place back there where a gang of guys called the Backwoods Men live. I've always been suspicious of those guys. We have a law here that in fishing you can only use one hook for one line, no more.

I was successful at infiltrating their place by the river. When, Holy Cow, what did I find? Not only did they have poles lined up on the bank, I pulled in a couple and they had a dozen hooks apiece! So I pulled in the rest and left them lay on the bank. It would be a big surprise to them in the morning!

Also, I did some reconnaissance around their property -- the dog was sleeping -- and noticed what turned out to be some '60s vintage Do-it-Yourself Heathkit nuclear missiles, lined up in homemade silos, and aimed toward town. I moved them off kilter, so when they're fired they'll rocket straight up and -- I hope -- destroy the Backwoods Men themselves.

The next day I was up with the roosters, 9:00, and went to troll Goodwill for what I might find. The problem with Goodwill is it's completely unregulated. You can buy stuff anonymously. It's not necessarily scanned, it's cash transactions. Theoretically, it's the world's best place to make a terror connection, because you can leave notes in a particular jacket, say, then someone comes along and gets it. Well, the bottom line is, I did my best, so sue me.

Methodically, I took each jacket, one at a time, to the dressing room, and went through the pockets. Noon came and went, then 2 p.m., before I was finished. But nothing. Then as I'm leaving, some madman goes running out of the store, and runs straight into a city bus, blowing up himself and 40 passengers, an inferno. The note had been in a pair of pants ... damn it! But 'every little bit helps,' I'm telling myself.

This actually taught me a lesson, that to catch terrorists, you need to think like a terrorist. We think they sleep in the day when we're all awake. That's what they want you to think. But, thinking like a terrorist, why would they do that? No, naturally they'd sleep during the night just like anyone else. But they're tricky, see? That's actually what they want us to think. Taking it one step further, they do sleep during the day when we're awake. Then use the "cover of night," when we least expect it, to do their flight training.

So I went to the airport, the local airport, late at night. I flashed my ticker tape at the door and got right in. I yelled, "Stop that plane!" They radioed out and brought back a disgruntled man in a business suit. The president of our biggest industry, headed for a convention. So we let him go. Next, I told them to stop a second plane. The boss of the airport headed for a convention. So we also let him go.

That left a third plane. But by now I was gun shy and didn't stop him. I made a mistake! He simply took to the air and immediately shot down the other two planes, killing both distinguished men and their pilots and fleeing. Next time, I resolved, slamming my fist on the desk, that guy gets stopped first!
Posted by dbkundalini at 7:18 PM