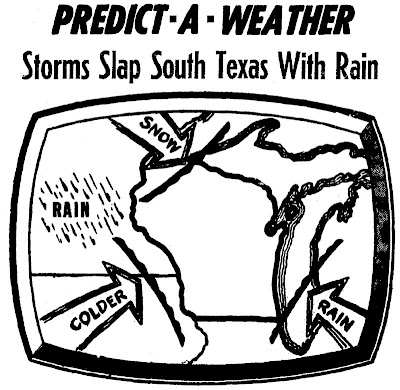 I know you can't tell it, but I wouldn't lie to you: I'm not at home right now, but I'm out in the field. Stormchasing!
I'm accompanying a friend, going cross-country, learning about stormchasing, and even helping him with some of the routine tasks. Like charting our findings and experiences. I had no idea guys even did this, but it's lots of fun.
It's not entirely as dangerous as some of the stormchasing you hear about on TV, for which I'm thankful. But there's still some danger even when you're chasing rain. Watching for it, then going right into the eye of the storm, you can get plenty wet. And anything could happen ... for one, you might slip in the mud.
We started out today -- and now we're about 100 miles from home -- looking on internet weather sites, then buzzing over where the orange and red were the most intense. According to the map's legend, those are the places with the biggest rain traffic. More water than you can shake a stick at!
I have to say, I really like the accuracy of these internet maps, because we found rain most of the time. And the times we didn't, we got the sworn testimony of others there that it had rained, as well as the evidence of soaked soil and pavement we could see. The times we were there for the rain we filled a babyfood jar with it, giving us all the proof we need that we personally witnessed it.
OK, I'm a newbie, so forgive my excitement. But I was really thrilled when I experienced for myself rain the first time. We were only about 50 miles from home, so you can be that close and get rain. The map showed a red spot probably five miles in diameter. My friend spoke with all the confidence in the world: "We will run right smack into it!" I crossed my fingers for luck and he hit the gas. Within 10 minutes, there we were, with rain coming down in sheets. A thing of beauty. I noted it as follows in my journal: "I'm out here, and this is definitely rain!"
I got out and in addition to getting extremely wet I got some pretty good firsthand data. Preliminary measurements indicated the rain intensity was in the "buckets" range. Of course we will review the data later, but I think it will hold up. I haven't been that wet in a long time, actually since the last time I went swimming. The big difference then was the water was completely horizontal and in a pool, and here it was vertical, coming from the sky.
That was a thrill. But there's another thrill, which comes from having uncertainty. It might even be more fun, because anyone can see a red spot on a map and know it's rain. The real fun is to be had when you're not sure you're going to get rain. That's because you're working off past memories, and even your gut. You don't see rain, it looks negligible on the map, but you "feel" it might still be there.
This is where my friend's years of rainchasing trumped any experience I had, which wasn't much. He found a couple of negligible spots on the map, printed a hard copy, and took out a compass, protractor, and three darts. He drew a few circles, then studied the various angles between them, and put the paper on his car, stepped back and threw the darts. One dart hit the map in a promising place. The other two hit the rear tire, meaning there was a short delay before we could leave.
Once the tire was changed, by now the data was out of date, but thanks to the magic of science, and the various histrionics my friend went through with the compass, etc. -- extrapolation -- when we got there, we weren't disappointed. We were just in time for a few sprinkles. I put my hand up and personally attest that I felt definite drops. Water from the sky, it's a strange thing when you really stop and consider it. It varies from lots to not much.
Along the way, I acquired some other good proof -- proof is always needed later when you're bragging with other rainchasers. I got some great pictures of various puddles, water standing in fields, gullies that were newly washed, and the flat tire, mud-splattered on the side of the road.
Just to anticipate what I know you'd say to me, yes, we are staying safe. Safety is always job number one. We haven't forgotten, rainchasing is exhilarating but also very dangerous. It's exactly like I heard as a kid, you can drown in a teaspoon of water, if you hold it just so and breathe with all your might. But we took certain precautions for safety sake: We generally used an umbrella, and we left the teaspoon at home.
Posted by dbkundalini at 7:32 AM