He Puts His Pants On One Leg at a Time 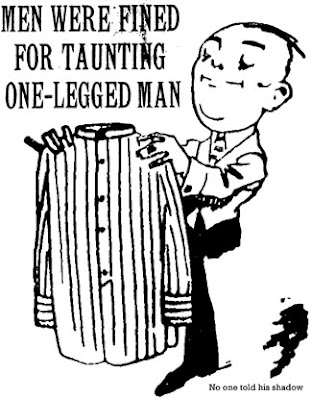 Oh, the terrible agony I'm facing! Two nights in a row I haven't been able to sleep. Two mornings in a row I'm up before 4 a.m. That's no good.

I'm there in bed -- laying or lying -- tossing or turning -- and nothing works. Prayer, meditation, counting naked women. I thought I'd surely hit on the right combination, five women and two prayers, something, but none of it was good.

And yet -- I suppose the NSA already knows, I may as well make a clean breast of it (there's another phrase) -- up till today, I have indeed done the pants putting-on-thing one leg at a time. But today I tried it two legs at a time, which isn't really all that hard. You just have to be careful not to let one foot get ahead of the other. If the feet come out the bottom at the same time, there's your payoff.

Then there's one-legged men, who, whatever they think about the Nazis, have very little choice. I'm certainly going to say very little about it. I'll turn a blind eye to it, one eye at a time, like everyone else. What do I care, really? I frankly don't buy into the whole "Nazis did it" argument. If you take that to the extreme, we'd all be breathing with air tanks and eating through our ears. Obviously we're stuck breathing and eating like the Nazis. That doesn't mean I sympathize with them, but I understand; how else were they to eat? Even if they ate with a feeding tube, it's got to connect to the same ultimate place, somewhere between the neck and butt.

Not being able to sleep, naturally I got up and did about 10 minutes research on one-legged men, two-legged men, and pants. This was blind eye research, since I wasn't really reading it, just getting a sense of it. One thing I can definitely report, the topic of putting your pants on one leg at a time, like the rest of us, has been covered. I saw newspaper reports back to the 1930s that it was done that way. Generally it takes the form of a famous person -- an athlete or politician -- even though he's famous and in some ways different from the rest of us, at least being the same in how he puts on his pants.

The research also shows that the phrase became more common, I'll say around 1968, then was used through the '70s extensively, the '80s somewhat, the '90s rarely, the 2000s more rarely, till we get up to 2013. Since I didn't see any newspapers from 2013, I think I can draw the conclusion that we don't use the phrase anymore. Of course in 2013 we do stuff online, newspapers are on the skids, cut off at the legs, without a leg to stand on. As for Naziism, it's now more the domain of people with extremely short haircuts, right to the skin. They're no longer that concerned with legs.

The article -- you see the headline above -- about the men fined for taunting a one-legged man ... That's from a newspaper in Jamaica, 1928. The incident was covered in the magistrate's court news in Bethel Town. The one-legged man's name was Lionel Graham. "The case of trespass and assault between Lionel Graham, a one-legged man, and Hines Goslin, Hamilton, Solomon, Graham Ramsay and another -- eight accused in all -- was heard. They pleaded not guilty." I'm having a hard time with that report. That Hines Goslin and Graham Ramsay were involved or not is clear. But who's Hamilton, Solomon, and another? And how does that add up to eight accused?

Anyway, they pleaded not guilty. Mr. Graham, for his part, informed the Court "how he was taunted and jeered by these young men and that they assaulted him. His witness corroborated his evidence." So what response do we get from the accused? "The accused stated that they were all innocent, yet strangely they admitted singing a song about a one-legged man. Their witnesses did not help them so His Honour imposed a fine of 15/ or 10 days on each."

Lionel Graham, the record tells us, was a one-legged man. That said, I won't be singing a song about his condition. Not only is it politically incorrect, he being differently advantaged when it comes to legs, but I'm afraid "His Honour" might come back and fine me 15/, and I haven't got 10 days to waste in jail. His Honour was a very powerful man but he used to put his pants on one leg at a time, probably. Not saying a thing about Hitler.
Posted by dbkundalini at 5:03 AM