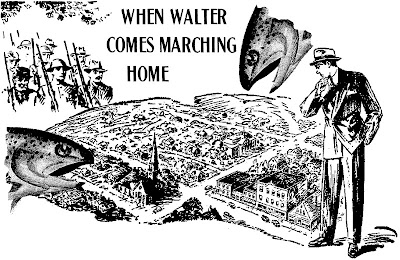 The life of Walter Spill had elements of the ordinary and the extraordinary. He was a military man, a family man, and a big wheel in the community. He wheeled and dealed himself into a dizzying life as an entrepreneur, making a lot of money and friends along the way. Then, like anyone who lives long enough, he died, with his bones gathered up and laid to rest with honors in Memorial Cemetery.

I spoke with one of the old-timers of town about Walter Spill, Dr. James Molar. One day they had a newspaper article about Walter in the Daily News, otherwise I probably would have never heard about him. (For copyright purposes, I will not quote from the newspaper account, but will simply do my best to paraphrase the key points of his life story as they come to mind, as well as my poor memory allows.)

The old-timer was a man who served with Major Spill, going back to his war service. The old veterans hate to talk about their military service, like pulling teeth, but if you pry diligently enough, going for all the angles, getting leverage, etc., finally you can loosen up the toughest molar. Anyway, this old boy, now frail and walking with a cane, bent with age, granted me a sit-down. We were at a particular cafe, a neutral site.

"So you served with Major Spill?" "Yes, that's right," his old friend, Dr. Molar, struggled to say, rasping, with each word a struggle. "You were together those years?" "Yes," he said with slight impatience, "That would appear to be what I carefully delineated a moment ago, with no excess verbiage added to the mix that might confuse you." I thought, "OK, I've got it..."

"What kind of leader was Walter Spill?" "A good leader," Dr. Molar managed to say, simply. But I dug deeper. "He was good, you say?" "Yes, good. By that I mean he excelled as a leader of men, prompted by some powerful inner source of fortitude and determination that is rare by any measure. The odds were against us, and as these things go, of course you have no guarantee of tomorrow. But the Major was fearless, prompting all of us to call forth our own bravery, till then an unknown presence."

"The newspaper said there was one battle where next-to-no one came out alive." "Yes, it was bad." "On a scale of 1 to 10, how bad was it?" With that, Dr. Molar struggled to his feet and left the room, and that's the last I saw of him. Leaving me to surmise that Major Spill and the others went together into battle with heavy odds against them, no doubt attributable to a larger or stronger contingency arrayed against them, with only one man of this side's force able to reemerge, that man being Major Spill himself.

The newspaper, just summarizing here, also told of Walter's poker-playing skills, Dr. Molar being their likely source. Just briefly, he had one hell of a poker face. Beyond that, quoting, "Of course all the other aspects of poker as a game, and the Major's keen gamesmanship at it, had to factor in, including his ability to read other players, his ability to compute the odds at any particular moment, along with that intangible thing we simply have to call luck."

After the war, Major Spill -- Walter -- came home and settled right here, back in his hometown. It was the post-war years, when new neighborhoods had to be developed. Walter settled into a career combination of city-planning, real estate, and cheap architecture. By now, of course, he was simply Mr. Walter Spill. There was a large profit to be made, with men coming home throughout those boom years.

Again, from the newspaper: "Socially, we were going from a more centralized arrangement of tight traditional neighborhoods toward the city's outskirts and beyond. It wasn't exactly sprawl, with the negative connotations of that word, but a natural widening of the local parameters, a thing of pride at the time. You annex, you pave, you make winding roads through the neighborhoods, you plant the same tree. At first the cheapness of the houses was a virtue, but naturally they quickly go to pot, after many years of hard use." As above, I take it Dr. Molar was the source of this quote as well.
Posted by dbkundalini at 9:14 AM