Paradise Restored -- The Monk and The Nun 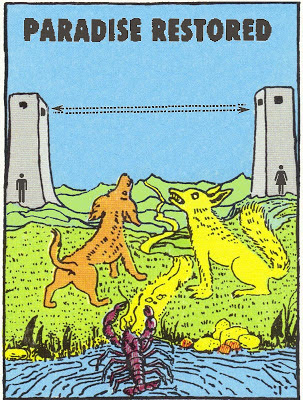 In my opinion, this has to be the happiest story ever. If you're ever down and blue and want a happy story to cheer you up, anytime, anywhere, please bookmark this page, then you can return to it time after time. I know I'm going to, because, frankly, there are those times when even I, an ordinarily cheerful person, need a lift. Here you get that lift! This is a story of "Paradise Restored."

We're all familiar with "Paradise Lost." Not only was it a great poetic work by John Milton, beyond him it is a concept, from Milton's point of view biblical, but really a common story in humanity's experience. Even if it's something as minor as a child's disappointment over a toy. But we're not all familiar with "Paradise Restored," which also was one of Milton's works, but not nearly as good. I for one haven't bookmarked it.

OK ... on with the feelgood experience of a lifetime ...

This is the story of two young lovers, probably a lot like Romeo and Juliet, head over heels in love. As is typical with two hot hormonally-driven kids. You probably remember the feeling. Nature is calling, and, by God, if your soul mate isn't standing right in front of you! Two legs, nice smile, and all the rest. You fall immediately into one another's arms, and pretty soon it's all over ... all but the intense guilt. "I'll never do that again ... Nor shall I!" But how's it going to go three days from now?

Well, in this case, of A and B -- him and her, respectively -- they saw the vanity of it all, the flesh, and immediately withdrew after that one time. They were true to their word: "I'll never do that again ... Nor shall I!" A immediately joined a monastery, B a convent. (These institutions were some religion other than Catholic, since neither A nor B were Catholic.)

The Father Superior and the Mother Superior, both, were skeptical. They weren't sure of their vows. So to test them, they sent them to a place for that purpose. Two towers across from one another with a direct line of sight between them. The stairways down were clear, the doors unlocked. All they had to do was motion, one the other, and they would be joined again somewhere in the middle.

But they were among the lucky -- I should say, the disciplined, those true to their vow -- that they were able to withstand the temptation. Not that temptation was that great. They had made vows and they stuck to them, incorporating the essence of the vow into their thinking, into their very marrow. If you read about the three gunas in the Bhagavad Gita, they lived the good one all the way. They weren't concerned about the fruits of their actions. And they were way beyond dark inertia.

Both windows remained open, the line of sight ever clear. They could look across whenever they chose to. But for the most part they were studying their devotionals and finding ready connections between the enduring truths of life and their own thoughts and essence. They had some little duties for the monastery and convent, like calligraphy and making repairs to cassocks. These duties they tended faithfully.

When it came to lust one for the other, they simply didn't have it. It didn't enter their minds even once. They transmuted all those drives and it became an honorable energy within them that strengthened them more and more in their devotion. What is earthly in most of us, and even devilish, was for them a perfect heavenly stream of light and power. They never -- A and B -- regretted their decision even for a moment and never doubted that their calling from above was real and blessed.

Naturally, then, when it came time for their prayers -- and this was almost constant, not as a task but as a way of life, as immediate and normal as breathing -- there was never a "Forgive me, for I have sinned." It is truly no exaggeration to say they simply experienced bliss upon bliss and grace for grace. Paradise indeed was restored for A & B! May it ever be the same for each one of us ... for you today!

Commentary on the picture -- The dog and fox represent the daily passions of life, which stood at a distance ever calling for attention, but were unheeded. The lobster represents the deeper drives from below, the chthonic impulses, which was never able even to get out of the water. It simply sat there and flexed its claws in vain, wondering why no one cared about it anymore.
Posted by dbkundalini at 9:50 AM