Do Bugs Deserve to Live? 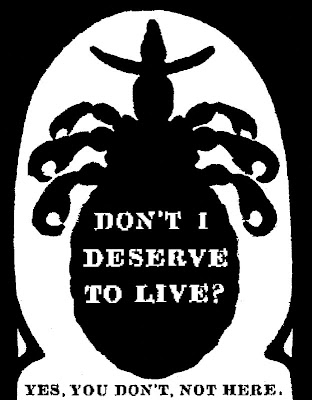 The first answer is, yes, they deserve to live, just so they're not doing it in my home. Which seems to be their first choice, even though they have the whole vast outdoors. But you can see it from their point of view, the vast outdoors has too many bugs.

I actually like bugs, I like nature, thinking of nature out there. To hear them at night is a joy. The only ones outside I hate are mosquitoes and chiggers and anything that immediately attacks me. Live and let live -- I say to the bugs -- and we'll get along swell.

Lately, I've been overrun with little fruit flies, since I've been eating more fruit. I don't know if they come in with the fruit -- my first guess -- or they're flying by and smell it. It's a definite downside to eating healthy, since I haven't seen any red meat flies, Cheetos flies, or candy flies. There no doubt are meat flies, but probably around the Amazon, where other weird things are.

The little fruit flies aren't hard to catch, squish, or otherwise annihilate, but so far it's just been one at a time when they're bugging me. I haven't gone after them systematically. There probably is a fruit-flavored poison for them, but I haven't looked into it.

As to whether bugs in your home deserve to live, I will apply three rules before jumping to my ultimate answer of "No, no, hell no!"

First, the Wild Boar rule. The Wild Boar rule is the rule of the ridiculous extreme, but it covers lesser pests. I would not be able to live in a house with a raging wild boar. I would do whatever it took to get it out, be it gun, arrow, poison, or dynamite. That'd actually be a good reality show -- like they do with gators -- guys coming around to clear your house of wild boars. Or even insect guys coming around to relocate insects back to their own wild habitat.

So, do bugs deserve to live in your home? Going by the Wild Boar rule, clearly not. It'd be nice if they left of their own freewill, but since they don't know anything of the nuisance they are, they probably won't. Another implication of the Wild Boar rule is that if the bugs were in your home in sufficient quantity, enough to make huge clouds, they'd probably kill you. So whether it's one or a million, it's all the same thing.

The second rule to consider is the Barney Fife rule, which is, whatever the problem, Nip it in the bud. It's true. If we nipped more stuff in the bud -- everything from weeds all the way up to mass murderers -- what a wonderful world it would be. We'd have fewer problems. Maybe we should develop a whole army of people -- the Nippers -- to do this. Or robots. What could go wrong? I can think of lots. This idea needs to be nipped in the bud. See how easy that was? Bugs in your house is the bud that needs to be nipped. They're not endangered species, they don't deserve to live in your home.

And if anyone quibbles about killing, I'm applying an even more awesome rule, the third rule, the Bhagavad Gita rule. Gita for the Mosquita! Have you read it? It's actually a wonderful writing, despite the weird-looking title. The hero, Arjuna, doesn't want to kill the opposing army. But God, in Krishna form, tells him he must. The answer is that the true self (the inner bug) is indestructible, enduring, unborn, and unchanging. The embodied self (of the bug) discards its little body, just as a man discards worn out clothes, to take on new bodies. Which sounds frightening, but it doesn't necessarily mean Super Bugs, only the next role of the self in evolutionary destiny. (BG, 2:21f).

I'm not even Hindu and I think that's cool! I'm doing these fruit flies a favor! The next Wild Boar you kill in your kitchen might one day be a saint!

To review, we have these three rules, and whether we apply one or all three, bugs do not deserve to live in your home.
Posted by dbkundalini at 9:53 AM