From Milk Bottles to Hawaii 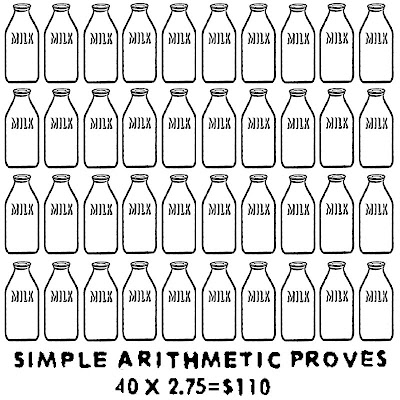 I'm totally surprised I didn't think of this before. Even I could save money with this system! With the added bonus that I would get back more than I put in, interest, a dividend!

I want to get this written as fast as possible, since I'm already dreaming of the possibilities. Then I'll have another glass of milk and get my bags packed. I'm just wondering, When you get to Hawaii, do they literally have a lei for everyone who gets off the plane?

This is so great I need to clear off shelves in the garage. It's glass gold! Finally, a collection with a payoff. With the old records I sold, the guy talked me so far down I was paying him to take them. But when you get to the store with a milk bottle, it's always the going rate. They never look at you funny.

Oh boy, as long as the storage space holds out, and I have other collectibles I can throw out to make room -- including Grandma's old Dionne Quintuplets crap that no one remembers. There's some memorabilia that took a nosedive! She should've collected plates and knick knacks from the Titanic -- the market's unsinkable.

There could be, however, one rub, maybe two. First, there's the store. They're definitely OK with bringing in one or two bottles. Or a few more. But what are they going to do if I show up with over a thousand? I can picture the look on their face: confusion, anger. Suddenly there's a conference of managers over by the wall, out of earshot. One of them has a dirty apron. He's wiping his hands and shaking his head, glaring at me.

I'm standing there. The line stretches to the meat counter and a mile out the back door. Me, with compassion for the suffering, I'm sweating. It took me two hours to lug the bottles into the store. I've arranged every available cart into one long wagon train. The clanking glass sounds like a plague of heavy metal locusts.

Finally, the guy with the apron -- who seems to be waving in some backup -- tells me the basic problem. I erupt in anger and end up in prison. As they're gassing up the gas chamber, I get one last meal, and one last glass of milk, unfortunately 2%, not whole.

The other potential problem is with the dairy itself. Little dairies that put out this milk with the fancy deposits aren't prepared for anomalies like 1,000 bottles from one customer. They're so small, something like three bottles is too much, but of course they can't complain. Having a 1,000 bottle spike might actually shut them down.

And then there's the interest. Their bottom line is so tight, they'd have to lay off a dozen people and forty cows to pay it. Factor in, too, because the 1,000 bottles were missing from their return cycle, they had to buy 1,000 new ones. That took money. And now they have no room for the added returns, blah blah blah...

To which I say, with full understanding of how I screwed up everyone's precious system: "Cry me a river! Oh, boo hoo. The poor employees are going to all die, aren't I a horrible person? You have to lay off cows? Let 'em work on the pig farm! They could use the change of scenery! And pigs like milk, probably. Let 'em nuzzle up against Bossie. Maybe she won't be so bossy when she finally has to give up the security of her own little barn, and all the fancy milk spigots. I say, 'Go ahead, lay 'em off, give them a gold bucket for retirement!'"

And to the store -- OK, I'm pissed; I want to go to Hawaii -- I say, "This is one hell of a way to treat a paying customer! My family's shopped here for generations. You weren't complaining when we carried you through the Depression. We could've been lined up at the courthouse, getting handouts like everyone else. But Grandpa hunted, and sold furs on the black market, giving us enough money to buy your damned groceries! Oh yes, how soon we forget! That's when milk became my family's favorite drink, because when everyone else's bones were crumbling and the streets were full of decaying skeletons, my family's bones were fortified with calcium. It was my family, then, that had the energy to clear away the dead and disinfected the whole stinking place. If it hadn't been for us, all this town would be good for is tumbleweeds, and probably most of those would be crummy."

Bottom line: Full speed ahead, I'm packing for Hawaii! I'm going for it! A half gallon today, another tomorrow, this is how I'm saving money from now on. And if they don't like it, well, I'll be ready.
Posted by dbkundalini at 7:00 AM