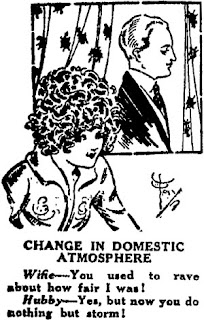 It's impossible for me to hate anyone. I'm a lover, not a hater. If I ever got married, it's extremely easy to think of me being married forever. The fact that it's not yet been tested notwithstanding.

But I know the divorce courts are full of those who have known love, then love turned to hate, and the former lovers have turned to the judge for judgment, to terminate their marriage.

What was the basic problem? At the risk of oversimplifying the issue, I'd say there was some trouble with their vows. We all know the traditional vows, the couple vows to be together in sickness and health, for richer and poorer, and not to get caught having sex with others.

I'm guessing it's the last vow that's the toughest to keep, since everywhere you look there's another heavenly specimen walking by in a tight dress, hair just right, the face of a devilish angel, and nicely perky. Or a studly guy, with all the bulges in the right place. But then, back at home, what you're looking at at home, if it was a car it'd be in the junkyard, if it was a fight it'd be stopped.

So what happens, love turns to hate. Maybe not all at once, and maybe not irretrievably so. I'm thinking love can turn to hate, then hate back to love, then love to hate again, then hate at least once more back to love. It all depends. Maybe you've had an epiphany not only about vows but about the true nature of love. Love doesn't actually have to do with whether the other person has become decrepit. It's something from the soul and concerns the soul. You find that out, but you can also forget it.

But if you had been doing the proper stuff of a relationship all along, by now you'd be sharing humor and all the graces of life. If you ever veered off toward hate, you'd catch yourself and correct course, veering back toward love. That's how you're able to pass satisfying, good years together, having established yourself in a mutual place that isn't superficial.

Think of how crazy it is to love, to hate, then to love, then to hate again. You honestly can't be that shifty and shiftless. Although to be fair, maybe you can. If you came up in a household where shiftiness and shiftlessness were allowed to take root and grow. But honestly? You can't overcome that? I think you should be able to, especially if you see how crazy it is. And destructive.

It'd be like painting your bedroom black, then painting it white, then black, then white. I don't think very many people would see that as desirable. It'd be a life of weird extremes. Or trading in good health for mad cow disease, then working like a dog to get well again, then exposing yourself again to mad cow disease. Hard to imagine. Or being normal, then infecting yourself with trichinosis, similar to mad cow but coming from pigs, the disease that honestly scares me more than AIDS. I eat pork, I don't sleep around. Pink I don't like, at least in pork.

For a good relationship to stay good, one great pointer is to stay on the same page. Have a genuine interest in the other person, while allowing the other person to still be a separate person. You come together, you share mutual things, while having enough different between you to keep it interesting. On the other hand, if you have one person who is totally interesting and the other isn't, you're going to get out of sync.

Remember the old windshield wipers we used to have? They worked on two separate mechanisms. One mechanism would go just slightly bad, and next thing you knew, one wiper was faster than the other. I used to see this and be almost hypnotized watching the variances, as one wiper lapped the other in their sequence. If you watched it for 10 minutes you could time it out and make scientific judgments about the variance. I guess that's the background I have that makes me such an expert in the psychology of couples. Watching windshield wipers.

My expertise is good, since I'm able to provide counsel to anyone having trouble in a relationship. If you started out with love, then you just need to let love bloom again and grow continually. If you started out with hate, well, that doesn't sound very likely. Just don't let love become hate, and if you already did, work at it to make hate love again. Then get it firmly in the love gear and keep it there. Don't veer off to hate again; make double damn sure you don't. That should never be done!
Posted by dbkundalini at 12:37 PM