I Saw a Milk Truck Today 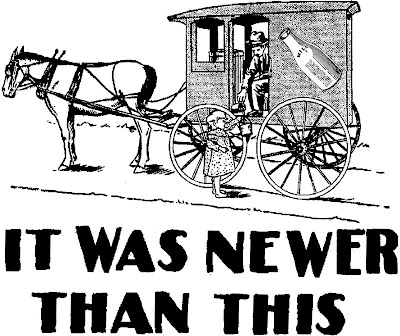 The truck I saw was a lot newer than that, probably brand new. It was shiny and nice, the way milk trucks have to be kept. To see a dirty milk truck, that's barely imaginable.

But just to see a milk truck at all! You know how rare it is to see one. I probably see eight to ten in a year, and of course the high school's just over the way. Whether high school kids even drink milk these days, I don't know. Probably some do ... some don't ... like everything else.

I certainly don't see them pass the road right here in front of the house. That was the first one in a long time.

I probably should explain one other fact: I was right there at the road. It wasn't that I was inside and saw it through the window. The timing was such that it was freaky. I went to the road to get the newspaper just as the truck came by. Entirely different.

You can probably see where I'm going with this, the unusual nature of the truck coming by along with the fact that I was right at the road, less than 10 feet from the truck itself. I couldn't have planned it had I tried. I had no idea it was coming. Had I known, my morning would have been totally different. I would have been periodically checking the clock, etc., then hoping he wasn't early or late.

But as it was, I simply went to the road, entirely unexpecting of anything, and it came by.

The reason I like milk trucks no doubt has to do with the wholesome goodness of milk. It's one of my favorite drinks. I hate to pull rank on anyone, and my purpose in this is not to impress anyone -- far from it, why would I care? -- but I loved milk before it was cool. They started advertising it on TV 20 years ago, or something, and everyone jumped on the bandwagon. I was already there!

So couple the fact that I love milk with the fact that I love interesting trucks, especially when they're antiseptic and beautifully colored, and you'll see why this truck passing by was something of such interest. It would appeal to young and old, mostly children but many older folks, like myself.

And when you're not expecting it! But good grief, there it is, big as life, I couldn't have conjured up a better one if I tried -- isn't life great? It's just the sheer grace of the moment that gets me. Bowls me over. I'm so delighted by life today -- milk truck or no -- that were it to fall on top of me and crush me, I'd look for the blessing in it. You ever get that kind of day?
Posted by dbkundalini at 9:22 AM