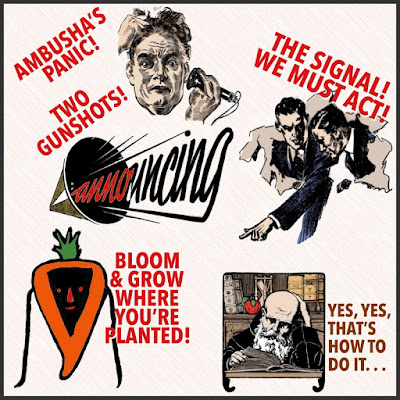 Chapter 22 of 25 -- Head Hunters of the Amazon
Strategy

Up de Graff and the explorers had to move at once. Being at the mercy of the infuriated -- wildly inflamed -- Huambizas was clearly bad policy. Either push upstream or backtrack, go somewhere. But to go upstream would a hard fight; their equipment was too heavy for the five men to cope with. They'd be easy targets for a surprise attack. And they were still desiring to trade the Jivaros out of their shrunken heads.

The explorers decided to follow them downstream where they were sure to be curing the heads. They might be able to make a good deal with them. But between now and then there were still security concerns. A number of battle-heated savages were still around and in a nasty temper. Some were trying to "borrow" rifles, with threatening spears in hand. One especially persistent guy was hit by Jack in the chest with the butt-end of his Winchester. The explorers were losing their self-control, but just wanting to avoid another massacre. And I have to confess, impending massacres always give me the jitters.

You might remember the crewman called Ambusha. He's the guy Up de Graff kept his eye on most, for his excess drinking of rum, reading up on anarchism, having an oily manner, being shifty and a known liar, cleaning his rifle too much, etc., and how he was relieved of his duties as cook. They put him in the middle of the column of boats as the fleet started moving.

They had one last look at the grinning skulls of the shrunken heads with their bulging eyeballs and "dry tongues lolling in a mute farewell." In an hour they stopped at a sandbar for the night. They were separated by a safe distance from their native "allies." But they still could tell what they were doing, sitting around the fires and putting the finishing touches to the heads. There's a little intrigue. All along the head of the Jivaros, Tuhuimpui was hanging around with ideas of his own, even helping guide the formation of boats together with Up de Graff.

Now as they were traveling, Tuhuimpui steered Up de Graff's canoe. Tuhuimpui had received Up de Graff's orders -- this particular boat was not to move up from its place in the rear, and they were to take no risks. In quick succession, then, two shots from downstream roused them. Immediately, Up de Graff swung his rifle to the right and fired it into Tuhuimpui's stomach. The chief wilted and slid into the bilge-water. Other shots were made and the native canoes sped up in panic. These two shots by Up de Graff weren't random; it was arranged that two shots would be the signal if there were trouble downstream.

A few minutes later they came across Ambusha alone in a dugout. He was the one who'd given the alarm. He said, "The Indians in my canoe turned in-shore without a word of warning and landed, leaving me alone on the bank." He was sure they were up to deviltry, so he pushed off and fired. That was a lame story, of course, but Ambusha was judged a benefactor anyway, because Up de Graff was convinced an attack would've come sooner or later, and circumstances would've been more against them. It's always nice to do the wrong thing and have it turn out right!
Posted by dbkundalini at 6:00 AM