Gelatinous Mass, Happy To See Me 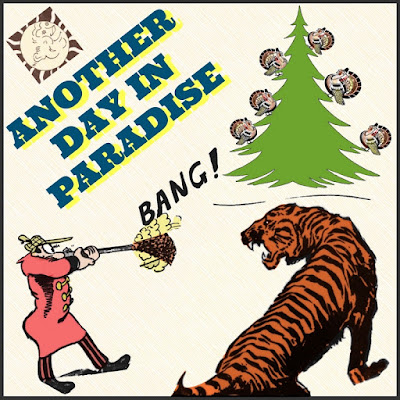 The explorers were on their way back to meet the rest of the team. The water was swift and they made good time. By Up de Graff's watch it was only an hour and a half to get there. They found all was well on Mitaya Isla. Their three fellow explorers had benefited by a good rest. I'll probably take a nap myself after finishing this. I woke up last night at midnight realizing that yesterday's (July 17) "Head Hunters" blog wasn't yet written! So I had to climb out of bed and suffer the slow waking up of my laptop to get it done. And in the middle of the night I don't know Pongo Menseriche from Peter Piper Picked a Peck. But through drowsy eyes and the current heatwave got the bastard done...

Up de Graff remembers the few days there chiefly by having lost his pants. (For the graphic I put pants on him, to stay on the right side of the Blue Laws of decency now or in the future.) He ran up against a tiger armed only with a half-barreled double-barreled shotgun. (It was originally a double-barreled shotgun but down to half barrel since the other one and a half had been blown off another time.) How he lost his pants was this: He was swimming the river with the half-barrel double-barreled gun, looking for turkeys which were settled in the trees. But the tiger was only 15 yards away. The tiger looked at him and slunk off. And his pants must've slunk off too.

Morse later found Up de Graff's "damned old pants" stuck in the mud, and filled them with turtle eggs, probably the less said about that the better. Could've been, "Is that turtle eggs in your pants or are you just happy to see me?" It'd be interesting in a slow dance with Sally Ann back at in high school. She feels the bulge, not hard, not even a consistent clump, but fairly gelatinous and diverse, but so as not to embarrass me thinks, "He's got a package all right, most likely jello and carrots, either that or nasty old turtle eggs..."

They continued on several trips as two parties during August 1899. About this time they started having some difficulties again with food. Up de Graff saw his hardtack barrel about empty. The last few biscuits had "whiskers" on them, which I think means mold, about two inches in length. Finally they all arrived, both parties, at Borja and were ready to attack the Pongo Menseriche. They erected a permanent camp on an acre of land. They planted Indian corn and yuca. There were no signs "as yet" of headhunters. If someone tells me the headhunters aren't here "yet," I'm concerned. I honestly don't think I'd look great with a detached shrunken head and fake beard a foot below my chin. But you know how it is, we're always our own worst critic.

Ed, Game, and Up de Graff explored the Pongo in the small canoe. Whirlpools and eddies were such that the craft was tossed like a feather, but it was spared destruction by its lightness. The main current of the Pongo initially is indistinguishable, looking like it's going upstream as well as downstream. There's a mighty gorge estimated about 1,000 feet high. Maneuvering corners is hard, with the currents in the center going strongly downstream. But currents on the sides go upstream by a backwash from the main stream's pressure against the ravine's walls. Then whirlpools. In such a kaleidoscope of motion, the lighter the craft, the easier the passage. I would've had to pee, which also would've passed easily.
Posted by dbkundalini at 6:00 AM