Try Not To Wet Your Pants 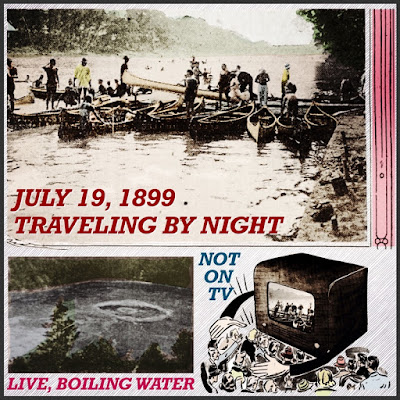 The plan that July night in 1899 after leaving the stores cached in their new base opposite Borja (near the Pongo) was to go back to Mitaya Isla, where Ed and Pedro were with some of the stores. The explorers made great time, the current carrying them the whole distance in a mere hour and a half, easy after the previous three days' slog.

The satisfaction of merely glimpsing the Pongo Menseriche, the gorge, made them light-hearted, so they were definitely up for it. Even now I feel light-hearted about them arriving, and we're talking 1899 and it’s all ancient history! But you gotta love the ancients, the bizarre stuff they put themselves through -- hard knocks a'plenty -- sometimes they died, sometimes they got the girl, and sometimes they just let out a whoop and a holler and if everything fizzled out to nothing they went back to work.

Indeed, with these guys it was still terrific hard work traveling at night with a strong current going fast. There's places on the Marañon river where it's live boiling water, the wicked swirling of currents around rocks, and you're also watching for fallen trees. The roar of the waves is so great it's like a train, then peaceful and steady. A lot of it you have to judge by sound. Definitely not for newbies, greenhorns, or river virgins.

If you're ever going to do it -- say you and your buddies want to relive the adventures of this book to the extent that that's possible -- it'd definitely be to your advantage to patiently build your skills on rivers closer to home. And if you don't have any rivers suited for decent practice, please, at the very least put a boat on some logs and get some kids to pull on it with ropes for, whatever, 20 minutes. Then you'll be ready for the real thing.

Because, no joke, think how perilous this would be. It's not a simulator, not a video game, it's three things: you, the river, and life and death. You're steering a relatively fragile craft through the many perils of the place and there's no forgiveness, no do-overs, no "my bads"; everything has to be just right in one take. It’s not TV, it's real life...

Your fleshy meaty paws grip the meaty paddle, you flash signals between yourselves, maybe a goofy grin and crossing yourself. Two thumbs up means good, the look of consternation and hair standing on end means not so good. Then you come 'round a corner and find yourself on a snag in boiling water, what do you do? Again, possibly prayer, violent oaths, crossing yourself, re-situating your fleshy meaty paws with a meatier grip and hoping to goodness everyone knows the signals.

Then you're off again, thinking, "We're gonna make it!" when suddenly the canoe's spinning in circles at a 45 degree angle! Now you're thinking, "I'm gonna wet my pants one way or the other!" And don't forget the fact, those snags aren't just odd branches but entire trunks of hundred-foot trees. Which could lift the boat high in the air. Or snap it clean in half. I just mentioned wetting your pants, now you've lost all control... That's why you needed to make sure you took care of business earlier rather than later, because you never know, later might be too late, and later than that could bring, would bring an endless stream of tragic, painful, soul-crushing regrets.
Posted by dbkundalini at 6:00 AM