Hungry Enough To Eat A Capibarra 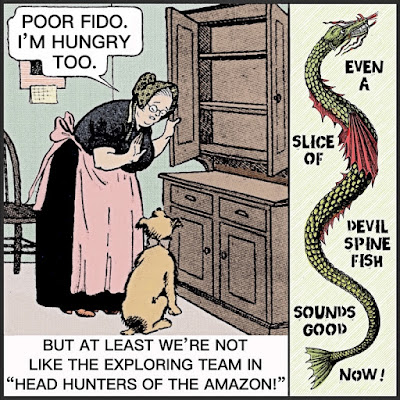 Remember yesterday I said the explorers were looking at food problems again, shortages? That happens today. In fact, I just ate an apple because I knew what I'd be facing, even Old Mother Hubbard sympathetic to Up de Graff, Game, Rouse, and the others, although I could never look down at a dog and tell her there wasn't enough food. That'd be terrible. I'd go without food myself rather than have a dog that doesn't understand go hungry.

On the seventh day near the Pongo Menseriche, a gorge with floods of rushing water passing through it, the water had fallen considerably. They decided to send the advance guard in a 20-foot canoe with 10 days rations to get in touch with the Antipas, who would supply them with fresh fruit and veggies and help paddle the heavy Exploradora super canoe beyond the Pongo.

Game and Up de Graff set off with a plan of passing the whirlpool. The water being reasonably low, they knew that was the best time to pass it. They steered near the outer edge and let themselves be carried around the rim -- dangerous. Then as they swung round toward one cliff, they paddled hard to avoid destruction. Swinging clear, they shot within landing distance of a sandspit, the only place within five or six miles where they could get ashore safely. I know if I'd been there I would've lightened things considerably by asking, "What would you rather have, a rimshot or a shot of rum?"

They camped there that night. The next day they made their way beyond the canon, fighting upstream with pole, paddle, and rope. But Up de Graff knew that troubles were looming fresh ahead of them. The first day they passed in the head-hunters' country, things went well. But progress was slow with the river difficult to navigate, the bed being stony and rough. That had to use the pole a lot. My thought on this is to look for food, fish, something. Turn over rocks, kick up a snake and shoot it, anything. Then worry about making nice with the head-hunters. If you're going to die, leave with a fully tummy.

But everything was a struggle, day after day. There was no game to be had. The food supplies became lower and lower until they literally had nothing but salt. On the sixth or seventh day, Up de Graff shot a capubara*, the only living thing they'd seen in a while. But it's flesh was revolting and virtually inedible. Still, it kept them alive three days. The bottoms of their feet were extremely sore, and they were crawling. They decided, "If at the end of this stretch [just ahead] there is nothing, we turn about."

As they went on, though, about two hundred yards from the bank, on a hillside, they saw a bright yellow Jivaro shack.

-------------
*The capybara, spelled capibarra in the book, is a mammal native to South America. It's the largest living rodent in the world, excluding Mickey Mouse.
Posted by dbkundalini at 6:00 AM