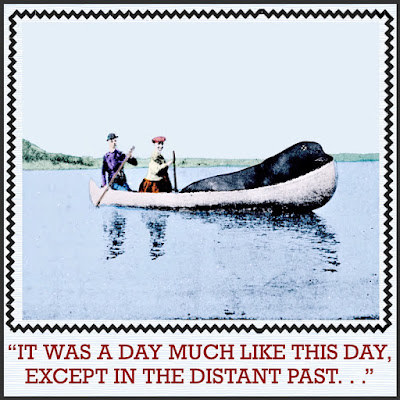 Chapter 13 of 25 -- Head Hunters of the Amazon
Barranca

It was day much like this day, except in the distant past. They had sunshine, water, a world stretched out around them, and though it was the distant past it simultaneously felt like "today" in exactly the same way our day constitutes the present. Something of a head-scratcher, I know, but if you keep thinking of it like our own lives it makes more sense. They weren't back in time, they merely lived then...

There was a character named Don Juan Ramirez who was a wealthy dealer in rubber and slaves. He organized his business to suit the place and it really flourished, big-time, with 300 Indians working rubber for him in half-a-dozen rivers. He also had steamboats to take passengers where they wanted to go. Which brings us to Up de Graff's team, who were with him on the Marañon going to Barranca. They passed many interesting settlements with canoes darting out from the various hamlets, some to be seen, some not to be.

Traveling there sounds very monotonous except for the clearings, since there's very little relief from dense walls of trees stretching on and on. The Amazon system has some 50,000 miles of water navigable by river-steamers basically like theirs. On this journey they'd gone up-stream for 10 days, daily stopping to hunt the night's dinner and chop fuel. The principal quarry was monkey, in fact the main dish at every meal, served as soup, stew, or roast. Monkey steaks, monkey soup, monkey see, monkey do. Even though we might easily be nauseated were we to live wholly on deer, wild turkeys, or any other forest game, that most certainly does not apply to monkey. From big to little, small to large, hairy or picked clean, as long as it's statutorily legal, every monkey is universally outstanding and delicious no matter how many times you eat it.

On the tenth day they arrived at the last Cocama settlement on the Marañon. Joining them there were expedition members Morse, Iberico, with their new, big canoe, the Exploradora. While at the settlement they bartered some goods for food with the Cocama Indians, one good for you, one food for me, etc.

Up de Graff charmingly describes these people's clever, devious way of spearing river-seals. When one's been killed, since it's impossible to lift it over the sides of the canoe, the occupants -- usually a man and a woman really rock the boat -- getting out and flooding it till they can float the river-seal in. Then, holding the seal's nose and the bow of the canoe together, they force the craft ahead, the backwater evacuating from a specially constructed poop. Then they climb back in and make tracks for certain and for shore!

The steamer pushed up the river and made Barranca that same night, a fine time being had by all.
Posted by dbkundalini at 6:00 AM