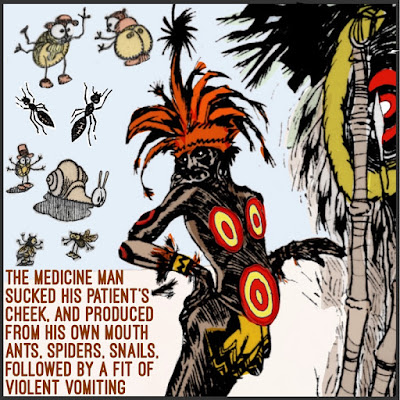 Chapter 19 of 25 -- Head Hunters of the Amazon
The Santiago

Up de Graff and Co. made their way to the junction of the Santiago and Marañon rivers. Then they saw some 200 Antipas canoes. And hundreds of natives in groups of families, some gossiping, some cooking, others having their evening meal, and others thinking of war. It was quite a bit different than the first time he saw this landscape, when they first paddled in and no one was in sight. It's like we always think, the whole world would be a paradise if no one else was around. But what would you do for a butler?

The fame of the expedition had spread among the people. So quite a few natives were waiting to trade with Up de Graff, offering fruit, vegetables, and other products for hand mirrors and striped shirts, for example. The explorers tried to drive it home that they didn't want to trade, having four canoes laden maybe five tons of stuff! But no one could be convinced.

They decided next morning to go round the whole beach and present the crew of each canoe with some merchandise to calm them down. Everyone seemed fine with that, but there was a stiffer problem, needing to organize a fleet to move cargo and canoemen up the Santiago and to guard against attack from a group called the Huambizas. They could pay out some axes, machetes, etc., as reward, but the explorers would need to be vigilant that they didn't simply get the goods and vanish.

Most of the Antipas melted away, leaving only a smaller group of their folks behind. And they were all due to be leaving soon. The explorers were having a hard time keeping everyone together, some pretending to fall sick to get out of the deal, etc. Up de Graff summed up his feelings on the folks, calling them "those treacherous and demoralized creatures who moaned and babbled between every half-dozen strokes of the paddle."

Some interesting things about Pitacunca, the medicine man, who used hayahuasca (its spelling in the book). This plant is how medicine men throw themselves into a trance whereby they can utter prophecies. That night Pitacunca was determined to go no further. He drank the drug and wailed out warnings about trading their labor for a shining axe. He prophesied, "Your homes are on fire and your families fleeing through the woods. The Huambizas have taken off half your wives into captivity..." It was a stern prophecy that made them think. In fact, panic broke out in the camp. (Up de Graff has nasty things to say about Pitacunca, "old fake," etc.) Note: If anyone out there has any ayahuasca, I wouldn't mind having some. I could give you a hammer or one of the cheaper models of axes for a decent supply.

But Pitacunca did some very interesting things, like sucking a patient's cheek and producing from his mouth an ant, a shell, a good-sized spider, a snail or small crab, then he'd vomit. He continued producing insects, dead or alive, a hat-full of them. And other strange things! I'd like to think medicine men like him are completely sincere, but who knows. There about has to be some performance art to it, making it a little more exciting, let's say, than "take two aspirin and blow your nose." I haven't had insects come out of my mouth one times in my life and I've occasionally been sick like everyone.

The explorers made the guys (temp employees) make them a shack that evening, then the next day a permanent shelter in which to cache part of their stores against their return. Next, Up de Graff made everyone return their axes and machetes, having failed to keep their contract of traveling with them. After those folks had gone, a couple hours later they checked their things to see if everything was in order. Well, half the axes and machetes and most of the poison were gone! And they never saw Pitacunca again. What do you suppose happened to him? It seriously was probably the ayahuasca. He could see the realms of glory, he knew they were going to screw him on axes!

Early in the morning they looked downstream and saw 55 Jivaro canoes headed in their direction.
Posted by dbkundalini at 6:00 AM