Our Candidate For Governor 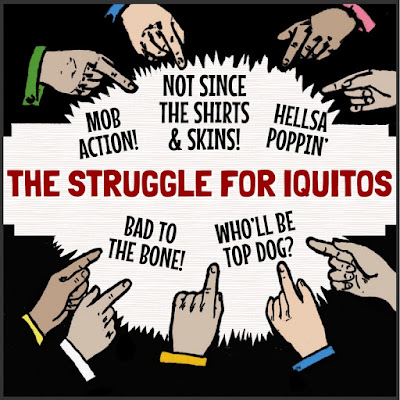 Chapter 12 of 25 -- Head Hunters of the Amazon
Tropical Politics

I've dreaded this day, knowing it lingered. Because it has to do with politics, exactly what everyone wants to avoid. Politics is a terrible thing on a blog because someone's going to get mad, then hit the door to escape and not look back. My only redeeming hope is that since it all took place in the 1890s and in South America, just maybe, possibly, I'll be able to keep the other continents in line and the precious traffic I get everyday. Folks, please don't desert me. My self-image is a tossup between sewage and poison... I'm down to my last nerve, please don't kill me... I have a lot to live for. Maybe I do or maybe I don't. But I like eating...

OK, let's say the crow files 600 miles, that's about the distance it would've flown from Iquitos to Lima. For anyone who isn't a crow, the journey is even longer, having to cross the Andes on untrodden paths. It's sheer misery, and the shifting of the river bed can also affect your plans; you might circle around for hours and not realize you haven't yet left. So once you're the governor in a place like that, you're set. Fairly isolated. You've got great personal responsibility and power. Not to mention the various taxes you receive from imports, trading, penalties, etc.

Unless this happens: One day in Iquitos, having already gotten a new governor, approximately 50 ruffians recruited by outlaws came up-river and dropped anchor. They took over the barracks, swore in the former governor's guard, and shot the new governor in the open street. He’d made a big mistake, telling people that whatever import duties they had paid the previous guy, they needed to pay again, to him!

It was so bad, another adventurer tried his hand at the coup game. Solomon Casas organized and led the counter-attack. Up de Graff says he was a prominent merchant and good soldier. Up de Graff also threw his support to Casas. (I implore you, dear reader, if you supported any of the previous scoundrels -- one, two, or three -- and are still hurting over their ouster, you should skip the rest of this paragraph. In which I declare my own support for whomever Up de Graff liked. Yes, I'm following his lead. Because I don't know one guy from another. And if Up de Graff was good enough to write this book, I assume he also knew who should lead Iquitos...

So one day our party formed in front of the store, then marched to the barracks. There was no resistance. Sentries that may have harbored deep resentment disappeared. And word was sent to Lima that order would be preserved until a properly constituted Federal authority should arrive. Iquitos settled down again.

Jack Rouse and Up de Graff took on two new members for the expedition, both Peruvians, Philipe Iberico and Pedro Valcarcel. As far as getting equipped for the journey, they bought new stores, food such as dry bread (hardtack) and corned beef. Then they realized they were buying several tons of stuff, too much cargo for the average canoe. When they heard of a giant cedar in one of the forests, they had a new canoe hewn from it. They named it the Exploradora.When they received word that it was done, they started up-river on a steamer to get it.
Posted by dbkundalini at 6:00 AM